Fire and Ice: Music from the north

Agave Baroque, a “brilliantly virtuosic… energized, free-spirited group” (Early Music America) performs its new program, Fire and Ice: from the North to the Baltic Sea. Hear the quirky, experimental, and sublime notes that wafted around and over these northern waters. Englishman William Brade brought dance music form the British Isles to Copenhagen, where he worked with, and may have taught the younger Johann Schop. Schop later settled in Hamburg, where he was succeeded by the talented but ill-tempered composer, Dietrich Becker. David Petersen, who spent his career in Sweden and Amsterdam, and Johann Paul von Westhoff, a virtuoso from Dresden, employed many of the same experimental and virtuosic techniques in their violin sonatas, and were hugely influential to the following generation of violinists (including J.S. Bach). Some decades later, Italians Domenico Dall’Oglio and Luigi Madonis moved to St. Petersburg for employment, and adapted Russian and Ukrainian themes into their music. The program also includes works by Nathanael Diesel (Sweden), James Oswald (Scotland), and Dmitry Bortniansky (Ukraine). Hear Dall’Oglio’s “Cossack Symphony,” Westhoff’s “Imitation of the Lute,” and Schop’s “Lachrymae Pavaen,” plus wild violin sonatas by Petersen and Madonis, and a charming trio-sonata by Englishman John Blow, as we track the melding of styles from sea to sea.

Agave Baroque is “an energized, free-spirited group” (Early Music America Magazine) that specializes in the virtuosic string chamber music of the seventeenth century. Founded in Los Angeles in 2008, Agave is now based in the San Francisco Bay Area, and continues to receive numerous awards and accolades and gain local and national attention for its “rapturous music,” “profound playing” (EMA), and growing discography.

During its initial season, Agave was selected by Early Music America to perform in a showcase concert at the APAP Convention in New York. In 2009, The Museum of Jurassic Technology in Los Angeles commissioned Cold Genius: the music of Henry Purcell, which Agave premiered at the MJT in 2010, and subsequently recorded. In 2011, EMA selected Agave Baroque as one of five finalists in the NAXOS/EMA Recording Competition. The following year, the San Francisco Early Music Society chose Agave to present a main stage concert on the Berkeley Early Music Festival, EMA selected Agave to compete in New York as one of six finalists at their Baroque Performance Competition, and the San Francisco Friends of Chamber Music granted Agave funding to record a second album, Friends of Ferdinand, which the VGo Recordings label released in 2013.  In 2014, Agave began collaborating with acclaimed countertenor Reginald L. Mobley, touring the southeastern United States with him and featuring him on their third album, Queen of Heaven: Music of Isabella Leonarda in honor of the Blessed Virgin Mary, which VGo released in February of 2015.  Also in the 2014-15 season, Agave was Ensemble in Residence for the inaugural season of the San Francisco Friends of Chamber Music/Presidio Trust’s concert series Presidio Sessions, and collaborated with Los Angeles new music concert series Jacaranda: music at the edge. In early 2016, Agave and Mr. Mobley returned to the studio to record Peace in Our Time: Music of Love and Loss in the Shadow of the Thirty Years War, which will be Agave’s fourth album, and their third on the VGo label.

Kevin Cooper is a classical and baroque guitarist from central California with an affinity for the extremes of modern and early music. He performs regularly with Agave Baroque and Ensemble Mirable. He also appears with Tesserae, Musica Pacifica, Les Suprises Baroque, Live Oak Baroque Orchestra, and the Corona del Mar Baroque Festival Chamber Orchestra. Kevin’s publications range from guitar quartet arrangements of Carlo Farina’s Capriccio Stravagante to a collection of folk and children’s songs entitled Snakes, Snails, and C Major Scales. His recordings include projects with Agave Baroque and Ensemble Mirable as well as Night of Four Moons, a CD of modern music for voice and guitar with mezzo-soprano Catherine Cooper on the Doberman-Yppan label. In 2006, he was honored as the Outstanding Doctoral Graduate in music from the University of Southern California, where he studied with William Kanengiser and James Tyler. Currently he leads the guitar program at Fresno City College.

Henry Lebedinsky performs as a historical keyboardist and Irish traditional guitarist across the United States and the United Kingdom, as a soloist and with Agave Baroque, Sonoma Bach’s Live Oak Baroque Orchestra, LUTEFISK, and The Vivaldi Project. He has also performed with The St. Paul Chamber Orchestra, The Charlotte Symphony, Seraphic Fire, and Boston Revels, among others. With the Seicento String Band, he has been featured on American Public Media’s Performance Today, and he has performed live on APM’s Pipedreams. With his Celtic band The Beggar Boys, he was featured in the nationally-syndicated NPR holiday special A Carolina Christmas from Biltmore Estate with Kathy Mattea. In addition to performing, Mr. Lebedinsky has taught masterclasses and workshops on historical performance practice at the University of Edinburgh, Bowdoin College, Davidson College, The University of North Carolina at Greensboro, and Appalachian State University, as well as at the American Guild of Organists’ 2014 National Convention. An avid composer of music for choir and organ, his sacred music is published by Carus-Verlag Stuttgart, with three pieces currently in preparation by Paraclete Press. He currently lives in the Seattle area, where he directs the guerrilla performance organization Early Music Underground (www.emuseattle.com) and serves as Minister of Music at Edmonds United Methodist Church. More information at www.henrylebedinsky.com

William Skeen plays principal cello in Philharmonia Baroque Orchestra, American Bach Soloists, Portland Baroque Orchestra, Musica Angelica, Pacific Music Works in Seattle, Pacific Baroque Orchestra in Vancouver, and the Bach Collegium of San Diego. In addition to performing with almost every baroque orchestra on the west coast, he is Associate Principal cellist and Viola da Gamba soloist with the Carmel Bach Festival. Mr. Skeen is a sought-after chamber musician. He co-founded the New Esterhazy Quartet, La Monica, and is a member of the 54th Annual Grammy-nominated ensemble, El Mundo. He has performed with the National Symphony of Mexico, the LA Philharmonic, and the Dallas Symphony, and often tours the Americas with Musica Angelica, the Wiener Akademie of Vienna, and actor John Malkovich.

Mr. Skeen is Adjunct Professor of Baroque Cello and Viola da Gamba at The University of Southern California, founder and co-director of the SFEMS Classical Workshop, and is on the faculty of the American Bach Soloists ACADEMY, and the SFEMS Baroque Workshop. William holds a Bachelor of Music degree from the Cleveland Institute of Music, working with Alan Harris, and a Master of Music degree from U.S.C., studying with Ronald Leonard.

Anna Washburn grew up fiddling in the beautiful state of Maine and now calls the Bay Area home. She performs and records on period violin and viola with Philharmonia Baroque Orchestra, Bach Collegium San Diego, Musica Angelica, and Agave Baroque, and at home in the Bay Area with Live Oak Baroque Orchestra, MUSA, California Bach Society, and Marin Baroque. In 2015, she was a fellow at the inaugural season of the Berwick Academy at Oregon Bach Festival.

In addition to her devotion to period performance, Anna also appears on stage with a variety of ensembles, from performing and recording with the pop orchestra Magik*Magik Orchestra with artists such as Sting, Chicago, Marilyn McCoo, and Billy Davis Jr. of the Fifth Dimension, Gerald Alston of The Manhattans, John Vanderslice, Third Eye Blind, The Dodos, Dustin O’Halloran, Tin Hat, and Two Foot Yard… to hip hop/opera group Ensemble Mik Nawooj… to the Commonwealth Club’s series “Music Matters,” where she performed as part of a multi-part lecture on Mozart’s chamber music. Anna can be heard on German pianist Hauschka’s album Foreign Landscapes and Belgian composer Christina Vantzou’s album No.1.

Anna performs regularly with Symphony Silicon Valley, San Jose Chamber Orchestra, Monterey Symphony, and Stockton Symphony, and is committed to music education through her active private teaching studio and by coaching and working with young musicians throughout the Bay Area.

Anna has studied with Bettina Mussumeli, Elizabeth Blumenstock, and Peter Zazofky, and has degrees in violin from the San Francisco Conservatory of Music and Boston University, where she also studied art history.

Aaron Westman was a “metal-head” and classic rock fan growing up in California. Attempts to turn his viola into an electric guitar were marginally successful. In college, he became obsessed with the heavy metal of the baroque period, and began to focus on the electric guitar of the seventeenth century: the violin. A “brilliantly virtuosic” (Early Music America) violinist and violist, he has made a career for himself as “one of the most popular period instrumentalists on the west coast” (Press Democrat). He has performed as a soloist and chamber musician with Agave Baroque, American Bach Soloists, El Mundo, Ensemble Mirable, Live Oak Baroque Orchestra, MUSA, Musica Pacifica, Seicento String Band, Seraphic Fire, and The Vivaldi Project. As a principal player, Aaron works with ABS, Berkeley West Edge Opera, Bach Collegium San Diego, Los Angeles Master Chorale, Musica Angelica, Musikanten Montana, Magnificat, New Hampshire Music Festival, and Pacific Bach Project, and performs regularly with Orchester Wiener Akademie and, since 2006, with Philharmonia Baroque Orchestra.

Aaron co-directs the award winning chamber ensembles Agave Baroque and Live Oak Baroque Orchestra (LOBO).  He has recorded for Hollywood, and on the Dorian/Sono Luminus, VGo Recordings, NCA, and Philharmonia Baroque Productions labels, as well as live on KPFK (Los Angeles), WDAV (North Carolina), BBC, ORF (Austria), and as a soloist on NPR’s Harmonia and Performance Today radio programs. His third album on the VGo Recordings label, Concertos for Winter, was released in 2015, and features Aaron as a soloist in two Vivaldi concertos with LOBO alongside co-director and violinist Elizabeth Blumenstock. Aaron tours extensively worldwide, including with two projects starring the actor John Malkovich.

Aaron holds a Master of Music from the Indiana University School of Music, where he double-majored in viola performance and early music. His principal teachers were Stanley Ritchie, Alan de Veritch, Theodore Arm, and Geraldine Walther. For three years, Aaron taught baroque strings at CalArts, near Los Angeles. He is currently Music Director of the Santa Rosa Symphony’s Young People’s Chamber Orchestra, and in the summer teaches at Chamber Music Adventure program in Tuscany. 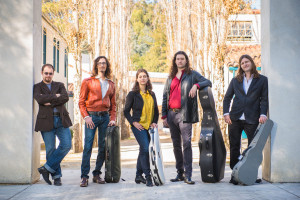