From The Ground Up!

Tickets available at the door. Price: $15

This year the Alphabet Baroque Club takes a break from merely eating plants and animals in order to sing their praises! Soprano and thespian Eileen Morris joins the ABC for a program of music with grounds, and music that invokes flora and fauna. The evocation of nature in music is a charming and often powerful compositional technique. Our program celebrates nature from the ground up, with pieces showcasing animals and plants from the watery frog to the heavenly angels. Of course, there are not a lot of composers who wrote about dirt, so we programmed many pieces written on a “ground”, or repeated bass line, to root us in the subject. Nightingales and cuckoos abound in our program. You will also hear an owl, a dove, a quail, a hen and a rooster, and a swan. Other animal references include a butterfly, a dog, a couple of cats, and a frog. In addition, there are lilies and roses, bee bag and nard, breezes and streams, and a few cupids and angels bringing news and singing triumphantly. Our featured composers include Handel, Buxtehude, Purcell, and Biber, and many more!

The Alphabet Baroque Club is a lighthearted group that plays seriously beautiful music. Now internationally acclaimed since their debut concert at the 2015 Galway (Ireland) Early Music Festival, the ABC performs regularly in the San Francisco Bay Area. The ABC uses historically accurate instruments of the baroque to explore the music of the baroque in its own sonority, and also happily re-orchestrates pieces to fit the ensemble, another historically accurate practice! The ABC is based in Sonoma County. 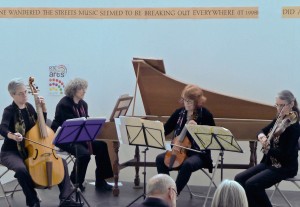 Judiyaba, pardessus de viole, is an escapee from the cello ranks. She now revels in the world of melody and ornamentation. In a parallel universe she plays with the San Francisco Opera, and is an artist in many media.

Maria Caswell, violin, pays her bills as a viola player in Philharmonia Baroque Orchestra, but prefers to exercise her ego on the violin. In a parallel universe she has a new cat.

Gwyneth Davis, viola da gamba, moved sideways from cello to gamba and now gets to have it all, bass lines and melody. In a parallel universe she plays with The Lamplighters and the Eloquence String Quartet.

The inimitable Phebe Craig, harpsichord, holds us all together. In a parallel universe she teaches at UC Davis.

This season the ABC is ecstatic to have Eileen Morris join us. Ms. Morris is an accomplished soprano and thespian, a regular star singer with Cinnabar Theater, where she has been seen as Donna Elvira in Mozart’s Don Giovanni, and Alice Ford in Verdi’s Falstaff, among many others.  Ms. Morris has been described as having “a beautiful presence with full command of the stage in her multifaceted role.” (Marinscope) In addition, she fits right in with our convivial crew! 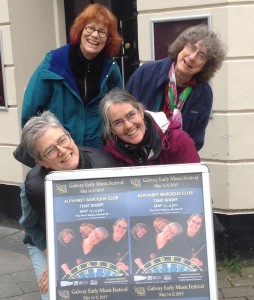