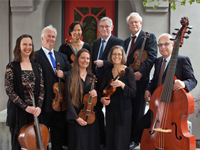 Concerti Teatrali—Scherzi and Burlesques of the Baroque

ARCHETTI BAROQUE STRING ENSEMBLE was founded in 2010 by violinist Carla Moore and viola da gambist John Dornenburg to perform the rich chamber concerto repertory of the baroque era. The collective experience and artistry of Archetti’s members allow them to develop distinctive, dynamic and historically-informed interpretations without a conductor. The ensemble’s size is perfectly suited to the bountiful 8-part-book violin concerti of composers such as Vivaldi, Corelli, Handel and Torelli, and is also small enough for the intimacy of Bach’s harpsichord concerti. Their concert repertory has included the famous Brandenburg Concertos and Four Seasons, but they have also championed music by Henry Purcell, Giovanni Gabrieli, Heinrich Biber, Pietro Locatelli, and Pieter Hellendaal. The group’s first CD, Grand Concertos: Handel and Hellendaal, was released in 2014 on the Centaur label.