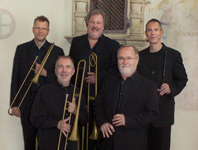 In the thriving 17th century trade city of Hamburg, instrumental music centered around the Ratsmusik. Though these council musicians were at first less highly regarded than church musicians, under the leadership of William Brade and Johann Schop this situation changed rapidly. Brade, in particular, coming to Hamburg from England by way of the court chapel of Christian IV in Copenhagen, transformed the idiom of English consort dance music into an elaborate personal style, incorporating italianate elements as well. In this program Concerto Palatino will put a spotlight on Hamburg by alternating these entertaining works of Brade and Schop with virtuoso ensemble music of the latter part of the century. Matthias wrote elaborate, highly expressive and fiendishly difficult sonatas for a mixed ensemble of string and wind instruments. They offer a stark contrast to the foot-tapping Galliards and the poignant Pavans of the earlier composers.