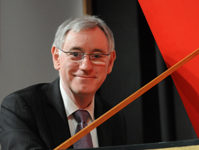 The 2016 Berkeley Festival opens with a musical tribute to former UC Berkeley professor Alan Curtis, a founder of the Bay Area’s early music community and a pioneer of historical performance. The program features works by three giants of the baroque harpsichord.

Davitt Moroney is a Professor of Music at the University of California, Berkeley, where he is also University Organist and Director of the University Baroque Ensemble. He has made over seventy commercial CDs, especially of music by Bach, Byrd, and various members of the Couperin family. His recordings have been awarded the French “Grand Prix du Disque” (1996), the German “Preis der Deutschen Schallplatenkritik” (2000), and three British “Gramophone Awards” (1986, 1991, 2000). In 1987 he was named Chevalier dans l’Ordre du mérite culturel by Prince Rainier of Monaco and, in 2000, Officier des arts et des lettres by the French government.