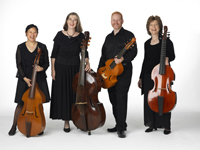 In Shakespeare’s world, viols lent their silver sound to mirth, meditation, and mourning. Parthenia explores this rich and varied repertoire from the luminous fantasies of William Byrd to the artful reworking of folk tunes, and the boisterous music of the eccentric Tobias Hume.

The viol quartet Parthenia brings early music into the present with its repertoire that animates ancient and fresh-commissioned contemporary works with a ravishing sound and a remarkable sense of ensemble. These “local early-music stars,” hailed by The New Yorker and music critics throughout the world, are “one of the brightest lights in New York’s early-music scene.” Parthenia is presented in concerts across America, and produces its own series in New York City, collaborating regularly with the world’s foremost early music specialists. The quartet has been featured in prestigious festivals and series as wide-ranging as Music Before 1800, the Harriman-Jewell Series, Maverick Concerts, the Regensburg Tage Alter Musik, the Shalin Lui Performing Arts Center, the Pierpont Morgan Library, the Metropolitan Museum of Art, the Yale Center for British Art and Columbia University’s Miller Theatre. Parthenia’s performances range from its popular touring program, When Music & Sweet Poetry Agree, a celebration of Elizabethan poetry and music with actor Paul Hecht, to the complete viol fantasies of Henry Purcell, as well as the complete instrumental works of Robert Parsons, and commissions and premieres of new works annually. Parthenia has recorded As it Fell on a Holie Eve – Music for an Elizabethan Christmas, with soprano Julianne Baird, Les Amours de Mai, with Ms. Baird and violinist Robert Mealy, A Reliquary for William Blake, and Within the Labyrinth. The ensemble’s most recent release is The Flaming Fire – Mary Queen of Scots and Her World with Ryland Angel, countertenor, and Dongsok Shin, virginal.

Parthenia’s musicians are Artists-in-residence at The Church of Saint Luke in the Fields in Manhattan’s Greenwich Village. Parthenia is represented by GEMS Live! Artist Management and records for MSR Classics. 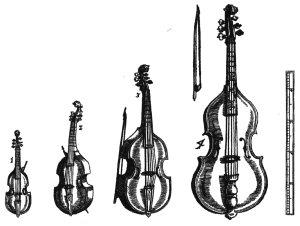 The viol, or viola da gamba, is a family of stringed instruments celebrated in European music from the Renaissance to the Enlightenment. Today on both sides of the Atlantic, soloists as well as viol groups-known as “consorts”-have rediscovered the lost repertoire and ethereal beauty of this early instrument. The viol was first known as the “bowed guitar” (vihuela da arco), a joint descendent of the medieval fiddle and the 15th-century Spanish guitar. Unlike its cousin, the arm-supported violin (viola da braccio), the viol is held upright on the leg (gamba) or between the legs; its bow is gripped underhand; and its body is made of bent or molded wood. These characteristics lend a distinctive lightness and resonance to viol sound that have inspired a wave of new works by 21st-century composers and a growing enthusiasm on the part of international audiences.