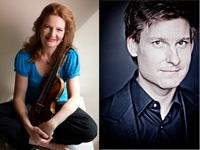 Bach Sonatas for Violin and Harpsichord

Two of the world’s great interpreters, and virtuosi, of baroque chamber music join to perform some of Bach’s most lyrical works, the sonatas for violin and obbligato harpsichord. Their program also will feature the Toccata for solo harpsichord in D minor, BWV 913, and the Sonata for solo violin No. 2 in A minor, BWV 1003.

Over the last two decades Rachel Podger has established herself as a leading interpreter of the Baroque and Classical periods and has recently been described as “the queen of the baroque violin” (Sunday Times). In October 2015 Rachel was the first woman to be awarded the prestigious Royal Academy of Music/Kohn Foundation Bach Prize. She was educated in Germany and in England at the Guildhall School of Music and Drama, where she studied with David Takeno and Micaela Comberti.

Rachel has enjoyed countless collaborations as director and soloist with orchestras all over the world. Highlights include Arte dei Suonatori (Poland), The Academy of Ancient Music, The European Union Baroque Orchestra, Holland Baroque Society, Philharmonia Baroque Orchestra, Tafelmusik (Toronto), The Palladian Ensemble, Florilegium, The English Concert and The Orchestra of the Age of Enlightenment. Rachel has also collaborated, toured and recorded extensively with fortepianist Gary Cooper. She is resident artist at Kings Place for their 2016 season titled Baroque Unwrapped.

Rachel records exclusively for Channel Classics and has won numerous awards including a Baroque Instrumental Gramophone Award for La Stravaganza (2003), the Diapason d’Or de l’année in the Baroque Ensemble category for her recording of the La Cetra Vivaldi concertos with Holland Baroque (2012), a BBC Music Magazine award in the instrumental category for Guardian Angel (2014), and multiple Diapasons d’Or. The complete Vivaldi L’Estro Armonico concertos, was released in 2015 with her own ensemble Brecon Baroque and has received critical acclaim. In Autumn 2015 celebrations for Rachel’s twenty-fifth disc release, Rosary Sonatas: Heinrich Ignaz Franz von Biber, coincided with Channel Classics twenty-fifth anniversary.

Rachel is founder and Artistic Director of the Brecon Baroque Festival, an annual four-day event bringing top-flight period musicians to the Brecon Beacons. She is an honorary member of both the Royal Academy of Music, where she holds the Micaela Comberti Chair for Baroque Violin (founded in 2008), and the Royal Welsh College of Music and Drama, where she holds the Jane Hodge Foundation International Chair in Baroque Violin.

Kristian Bezuidenhout was born in South Africa in 1979. He began his studies in Australia, completed them at the Eastman School of Music and now lives in London. After initial training as a modern pianist with Rebecca Penneys, he explored early keyboards, studying harpsichord with Arthur Haas, fortepiano with Malcolm Bilson and continuo playing and performance practice with Paul O’Dette. Bezuidenhout first gained international recognition at the age of 21 after winning the prestigious first prize as well as the audience prize in the Bruges Fortepiano Competition.

Since 2009, Bezuidenhout has embarked on a long-term recording relationship with Harmonia Mundi. Recordings include Mozart Violin Sonatas with Petra Müllejans, and Volumes 1, 2, 3 & 4 of the complete keyboard music of Mozart (Volume 1 was awarded a Diapason Découverte and Caecilia Prize and Volume 3 was recently awarded the German Preis der deutschen Schallplattenkritik). Other projects for Harmonia Mundi include Mendelssohn piano concertos with the Freiburg Baroque Orchestra and Schumann Dichterliebe with Mark Padmore – both recordings won the Edison Award. His recording of Beethoven violin sonatas with Viktoria Mullova (ONYX label) won an ICMA and an ECHO Klassik award for the best chamber music album of 2011.

Bezuidenhout was awarded the ECHO Klassik 2013 Award for Concerto Recording of the Year (Mozart Concertos with the Freiburg Baroque Orchestra) and nominated as Gramophone Magazine’s Artist of the Year 2013. Concerts in the 2013-14 season include appearances with the Mozarteum Orchester Salzburg, the Freiburg Baroque Orchestra, the Rotterdam Philharmonic and Arcangelo at the Tetbury Festival, as well as a play-direct programme with Tafelmusik. Recitals include Zankel Hall New York, Wigmore Hall London, Konzerthaus Berlin, Palau de la Musica Catalana Barcelona, Auditorium du Louvre Paris, and Oji Hall Tokyo, and the complete Mozart Sonatas at the Mozart Woche.