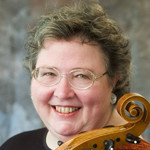 A Concert In Honor of Margriet Tindemans

This celebration honoring a luminary of the Early Music world will include medieval, Renaissance, and baroque music that Margriet loved and played, as well as her own compositions, performed by friends and colleagues, including Letitia Berlin, Frances Blaker, Shira Kammen, Larry Lipnik, Peter Maund, Robert Mealy, Rosamund Morley, David Morris, and others.

Multi-instrumentalist and occasional vocalist Shira Kammen has spent well over half her life exploring the worlds of early and traditional music. A member for many years of the early music Ensembles Alcatraz and Project Ars Nova, and Medieval Strings, she has also worked with Sequentia, Hesperion XX, the Boston Camerata, the Balkan group Kitka, the King’s Noyse, the Newberry and Folger Consorts, the Oregon, California and San Francisco Shakespeare Festivals, and is the founder of Class V Music, an ensemble dedicated to providing music on river rafting trips. She has performed and taught in the United States, Canada, Mexico, Europe, Israel, Morocco, Latvia, Russia and Japan, and on the Colorado, Rogue, Green, Grande Ronde, East Carson and Klamath Rivers.