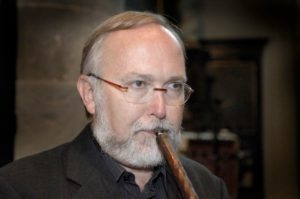 Bruce Dickey will present a Masterclass for advanced students of the cornetto. The class will focus on issues of interpretation and technique in both the solo canzonas and sonatas of the early 17th century and the ornamented polyphonic repertoire of motets and madrigals with divisions written either by performers around 1600 or by the students themselves. Issues regarding ornamentation, improvisation, articulation, breathing, and sound production will be addressed.

BRUCE DICKEY is one of a handful of musicians worldwide who have dedicated themselves to reviving the cornetto—once an instrument of great virtuosi, but which lamentably fell into disuse in the 19th century. The revival began in the 1950s, but it was largely Bruce Dickey, who, from the late 1970s, created a new renaissance of the instrument, allowing the agility and expressive power of the cornetto to be heard once again. His many students, over more than 30 years of teaching at the Schola Cantorum Basiliensis, have helped to consolidate and elevate the status of this once forgotten instrument. For his achievements the Historic Brass Society awarded him in 2000 the prestigious Christopher Monk Award for “his monumental work in cornetto performance, historical performance practice and musicological scholarship.” In 2007 he was honored by British conductor and musicologist Andrew Parrott with a “Taverner Award” as one of 14 musicians whose “significant contributions to musical understanding have been motivated by neither commerce nor ego.”

In the course of his long career as a performer and recording artist he has worked with most of the leading figures in the field of early music, including the legendary pioneers of historically informed perfomance, Gustav Leonhardt, Frans Brüggen and Nikolaus Harnoncourt. He was a member for over ten years of Jordi Savall’s Hesperion XX, and has frequently and repeatedly collaborated with Ton Koopman, Monica Huggett, Philippe Herreweghe and many others. Of special importance has been his long-time friendship and collaboration with Andrew Parrott, and in more recent years with Konrad Junghänel.

Bruce Dickey can be heard on countless recordings. His solo CD (Quel lascivissimo cornetto...) on Accent with the ensemble Tragicomedia was awarded the Diapason d’or. His second solo CD, entitled La Bella Minuta, was released on the Passacaille label in 2011, and was described as, “simply a brilliant recording”.

In addition to performing, Bruce Dickey is much in demand as a teacher, both of the cornetto and of seventeenth-century performance practice. In addition to his regular class at the Schola Cantorum he has taught at the Royal Conservatory in The Hague, the Accademia Chigiana in Siena, and the Early Music Institute at Indiana University, as well as master classes in the United States, Canada, Europe and Japan. He is also active in research on performance practice, and has published, together with Michael Collver, a catalog of the surviving cornetto repertoire, and, together with trumpeter Edward Tarr, a book on historical wind articulation. In 1997, together with his wife Candace Smith, he founded Artemisia Editions, a small publishing house which produces editions of music from 17th-century Italian convents.

In 1981, Bruce Dickey moved to Italy, partly to be closer to the origins and source materials for his instrument and its music. He currently lives with his wife and daughter in a country house, surrounded by vineyards, outside of Bologna, home of the original Concerto Palatino. Maria Brodsky studied piano and music theory at Moscow State Gnessin College in Russia, and continued her studies at the Moscow State Tchaikovsky Conservatory. She became especially interested in early music and historic performance practice, leading her to pursue her studies of harpsichord performance at University of Michigan School of Music. She studied with Edward Parmentier, Davitt Moroney, Natalia Yurigina, Yuri Kholopov, Tatiana Zenaishvili, and many other musicians to whom she feels very grateful for helping her have a profession she loves.  Maria performs frequently as a soloist and chamber musician. Some of her solo activities include a lecture/recital presented at the Super Regional Conferences of the College Music Society (Gettysburg, PA) and a solo recital given at Glinka State Central Museum of Musical Culture (Moscow, Russia). She collaborates with many Bay Area chamber groups and orchestras, including Monterey Symphony, Symphony Silicon Valley, Palo Alto Philharmonic, and Soli Deo Gloria Choir.  In 2014 Maria became a music director of Congregational Church of Almaden Valley, San Jose, where she performs organ, piano, and directs the choir Shalom.