At a Crossroad: Will You Live, Love, or Die? 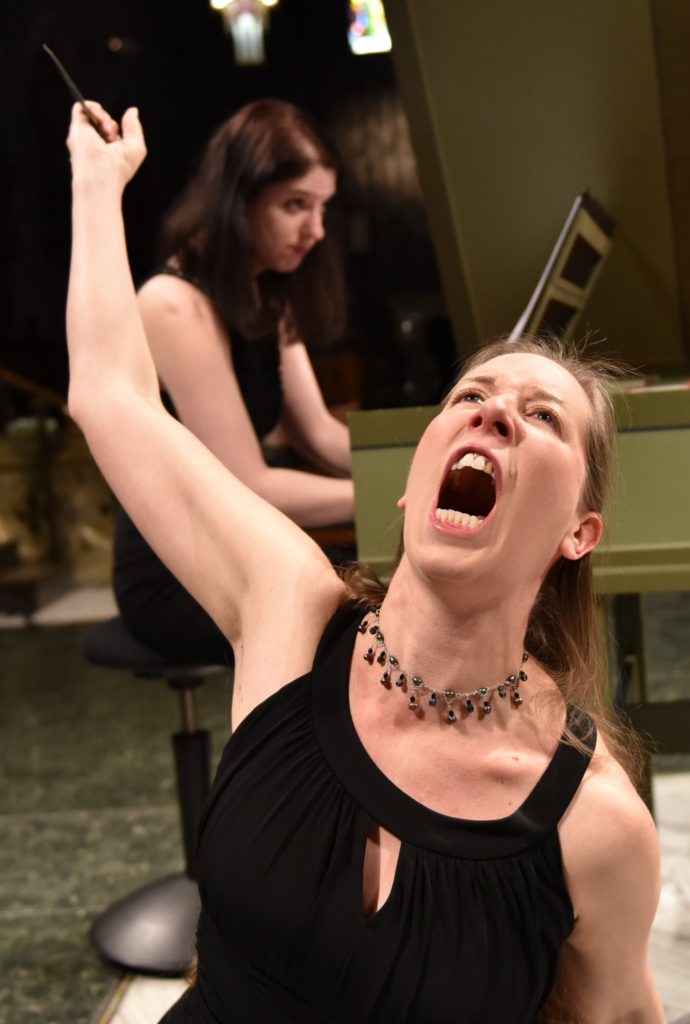 Many composers in the baroque era were inspired by figures and stories from ancient writings, and they used such mythological and fictional characters as the subjects for their compositional creativity. As twenty-first-century audience members, we are in a unique position to enjoy these musical works as pieces of a multi-faceted history. We can engage with them as commentaries on cultural norms in the 18th century as well evaluating how they relate to our current society. Each protagonist on today’s program is faced with at least one ethical dilemma, and their choices result in complicated scenarios concerning, life, love, and death. This program encourages you to consider how you would choose your own adventure if you were in the position of the protagonists. When presented with a difficult decision, would your choices result in life, love, or death for you and those that surround you? At a Crossroad: Will You Live, Love, or Die? is a diverse program full of surprising plot twists and compelling questions about how we engage with each other in relationships. We hope that this captivating hour of exquisite music will raise questions, challenge beliefs, and provide an excellent side of humor for good measure.

French harpsichord virtuoso and composer Élisabeth Jacquet de La Guerre (1665–1729) had an extraordinary and unconventional life. Born into a family of masons and musicians, she precociously demonstrated prolific musical talent from a young age. Recent documents reveal that she began performing as a harpsichordist for Henry XIV at the age of five.

Despite getting married, she continued her professional career as a concertizing harpsichordist, teacher, and composer in many genres. Jacquet de la Guerre was the first woman in France to compose an opera, and her sacred and secular cantatas were highly respected by her contemporaries. Semelé was included in her 1715 book of cantatas and focuses on the protagonist’s desire to see her lover appear as a god. Her impatience leads to a fiery death. Semelé’s plight, and our reactions to it, raise questions about society’s views of trust, honesty, and infidelity in men and women.

Joseph-Nicolas-Pancrace Royer (1705–1755) was an important figure in Parisian musical circles for the entirety of his career. Respected as a composer, pedagogue, and virtuosic keyboardist, he held a variety of positions in the court, the Opéra, and the Concert Spirituel. Some of his appointments included being the music teacher for the children of Louis XV and the master of music at the Paris Opéra. Although he was more famous in his lifetime for his operas, there has recently been a renewed interest in his harpsichord works. Only one book of Royer’s harpsichord music survives, the 1746 Pièces de clavecin. The pieces on today’s program are the final three pieces in the collection. The Allemande and La Marche des Scythes, which are virtuosic and bombastic, are contrasted with the sensitive and nuanced La Sensible. The Scythians are thought to be the first group of people to master mounted warfare.

Almost nothing is known of the French composer Julie Pinel (fl. 1710–1737). She was born into a family of professional lutenists who served the house of Soubise beginning in the 1680s. Her skills as a composer and her familial musical connections helped her to earn an eight-year privilège to publish vocal and instrumental chamber music in 1736. That year, she published a book of airs, and the next year her Nouveau recueil d’airs sérieux et à boire à une et deux voix (New Collection of Serious Airs and Drinking Airs for one and two voices) was published and dedicated to the Prince of Soubise. The cantatille, or small cantata, on today’s program is from her 1737 collection. This charming work features themes of rebirth and renewal and the joy of springtime. The final movement is a duet between the soprano and violin with continuo accompaniment in which the narrator implores the sweet nightingales in the forest to sing of love and happiness, in the hopes that it will make his cold, indifferent lover feel passion.

Of all the composers represented on today’s program, Nicolas Racot de Grandval (1676–1753) had the most unique career path. Grandval was born into a family of actors, and at a young age he joined a traveling theater troupe, for which he composed divertissements and incidental music. In 1692, he grew weary of his nomadic lifestyle and settled in Paris, where he was soon hired to write divertissements for comic operas. Grandval was also a literary writer, and he had a deep passion for satire. His first satirical composition was a parody of Clérambault’s Orphée, which he claimed was not to deride the original work, but rather to show that the most serious masterpieces are also susceptible to a humorous twist. Today’s program concludes with Grandval’s extensive and comedic rendition of the story of the Widow of Ephesus. To heighten the witty drama of this mini opera, the six characters in the story are all portrayed by the soprano soloist. The ‘Meet the Cast’ section on page 3 gives you a brief introduction to each character. Although this work is quite funny, it raises more serious questions about a culture’s view of widowhood and causes us to think about and examine what we owe the deceased. Ultimately, we must each find the balance between pursuing our own happiness and pleasing others.   -Paula Maust, 2017

Praised as “a refined and elegant performer” by the Boston Musical Intelligencer, harpsichordist and organist Paula Maust performs extensively across the United States as a soloist and chamber musician. Her diverse musical career focuses on historical performance practice and combines her distinct interests in performance, pedagogy, and scholarship. Paula is co-director of Burning River Baroque and a founding member and co-director of Musica Spira. She is dedicated to edgy concert programming that connects baroque music to current social issues. An active chamber musician and collaborator, she has recently performed with the Washington Bach Consort, Modern Musick, the Virginia Symphony, the Baltimore Baroque Band, and the B’More Bach Ensemble. Paula will attend the American Bach Soloists Academy this summer, and she has previously worked as an accompanist at both the Amherst Early Music Festival and the Oberlin Baroque Performance Institute. Recent solo engagements have been on the Baltimore Bach Marathon, the Pilgrim Church Concert Series, faculty organ and harpsichord recitals at UMBC, playing in masterclasses at the Flint Collection, and concerti with the Baltimore Baroque Band.

As an educator, Paula is committed to showing students the ways that the theoretical concepts learned in the classroom are directly applicable to performance and vice versa. She has been a faculty member at the University of Maryland, Baltimore County since 2016 where she teaches harpsichord, organ, music theory, keyboard skills, and music history courses. This fall, she will also serve as the interim director of UMBC’s Collegium Musicum, the university’s early music ensemble. In the past, Paula taught music theory courses at Towson University and was a music theory and ear training graduate assistant at the Peabody Institute of Johns Hopkins University.

Vocalist and multi-instrumentalist Malina Rauschenfels performs extensively as both a chamber musician and soloist, with a strong emphasis on early and very contemporary music. Praised by the Boston Musical Intelligencer as “spellbinding” and for her “powerful clarion tones and crisp articulation,” she has also been commended by Cleveland Classical for her “exceptional vocal range, strong acting abilities, gripping theatricality, and commanding gestures, both musical and physical.” Malina is co-director and a founding member of Burning River Baroque, where she sings and plays baroque cello and violin. She is also artistic director of hūmAnómali, a collaboratively structured music ensemble that incorporates “extra-musical affairs” inspired by dance, gesture, and theatricality into its historically informed performances of music from antiquity to the present.

Equally comfortable with early music and new music, she has recorded with The Newberry Consort, Duo Mignarda, Quire Cleveland, Marble Sanctuary Choir, and Toby Twining Music. She performs regularly with El Fuego, North Carolina Baroque Orchestra, and Trinity Chamber Singers. Recently awarded the Waterloo Region Contemporary Music Sessions’ ‘Contemporary Performance Prize’ for performing two pieces for singing cellist, she will be returning to WRCMS this year as a performance mentor and guest artist. This year she was also given the opportunity to perform as soprano soloist for the Mexican and US premieres of Luis Ruelas Romo’s Ja’k’áax, adapted from the Mayan poem by acclaimed Mexican writer Wildernain Villegas Carrillo. She recently sang as well for the premier of Alexis Bacon’s Three Songs from The Sheltering Sky, inspired by the Paul Bowles novel of the same name. While completing her Master’s in Cello Performance at Juilliard, Malina performed Davidovsky’s Divertimento for Cello and Orchestra with the Juilliard Orchestra under Reinbert de Leeuw and also played a solo recital in Carnegie’s Weill Hall. She majored in Composition and Cello at Eastman School of Music. As well as performing extensively across the United States and abroad, Malina currently teaches violin, viola, cello, flute, piano and voice in her home in Cleveland Heights, and recently released her first solo CD, In D – Solo Cello Through the Ages. Further information can be found at her website, www.malinarauschenfels.com