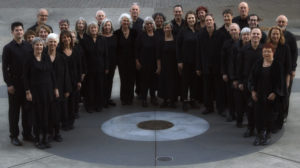 Charpentier wrote the Litanies de la Vierge early in his career, while in the employ of Mlle de Guise. The exquisite work, for six voices with two independent, treble gamba parts over it, was specifically written for Mlle de Guise’s house ensemble, in which Charpentier himself sang countertenor.  To learn more about treble gambas, read California Bach Society’s blog post about the gamba family at http://www.calbach.org/blog/2017/4/19/the-gamba-family-on-stage.

At the end of his life, Charpentier held the most prestigious choir director post in all of France: “maître de musique” of the Sainte Chapelle in Paris. It was for the choir that rehearsed and performed in this stunning church that he wrote the Missa Assumpta est Maria, nowadays widely considered his most beautiful mass setting. Artistic director Paul Flight says about this masterwork: “It is serene and exciting in turns, and has such a lovely scoring with the flutes.”

The California Bach Society, a 30-voice chamber chorus, was recently awarded “Best Baroque Performance” by San Francisco Classical Voice for its 2016 production of Bach’s St. Matthew Passion. Founded in 1971, CBS has specialized in historically informed performances since 1998 and has established a reputation for its interpretations of Renaissance and Baroque choral music. The appointment of artistic director Dr. Paul Flight in 2006 has resulted in highly successful concert seasons. Dr. Flight has enthralled audiences and critics with his thoughtful and refreshing programming, and has become well respected for bringing lesser-known Baroque masterworks to Bay Area stages.  Under his direction, the chorus has garnered critical acclaim.  In February 2013, Leon Chisholm of San Francisco Classical Voice wrote: “In recent years, the California Bach Society has become a prospector of Baroque gold. Its concerts have brought forth exquisite, rarely heard works by forgotten masters from the lost frontier, to the delight of its audiences.”  In 2016 another SFCV reviewer raved, “California Bach Society delivers a sublime St. Matthew Passion.”