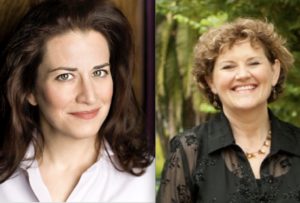 While this program of French baroque music will feature the spectacular instrumental works of Marin Marais and Jean-Marie Leclair, it will focus on two cantatas about the power of women. What could be more timely? The story of Judith’s bloody triumph over Holofernes was celebrated and politicized throughout the baroque era. Jacquet de la Guerre’s cantata is a spirited re-telling of the Biblical story. While Euripides emphasized Medea’s monstrousness, she was seen by readers from the Middle Ages to the baroque as a tragic heroine, an emblem of women’s will to avenge a grievous wrong. Clerambault’s astonishing cantata is one of the most powerful works of the age.

Elizabeth Blumenstock is regarded as one of the foremost exponents of early violin in this country, bringing a dynamic and vivid musical personality to her interpretations of music from Marini to Mozart. She is long-time concertmaster (and sometimes conductor) of Philharmonia Baroque Orchestra in San Francisco, the premier period-instrument orchestra in the United States, and is much in demand on both coasts as leader of large ensembles. In addition, she works extensively with small groups, including Musica Pacifica, American Baroque, and the Artaria String Quartet. She has recorded numerous solo and ensemble works, including Vivaldi violin concerti with Philharmonia, the complete Bach sonatas for violin and cembalo (with John Butt, harpsichord) and Mozart with the Artaria quartet.

Mary Springfels, viola da gamba, is a veteran of the American early music movement. She began her career at the age of 21 as a member of the New York Pro Musica and has been preforming actively with virtually every early music ensemble in the United States ever since. These currently include Ars Lyrical of Houston, the Houston Back Society, Sonoma Bach, the Arizona Bach Society, the Folger Consort, the Texas Early Music Project, and a new ensemble based in Santa Fe, Severall Friends, which she co-directs with Elizabeth Blumenstock. Mary became Musician-in-Residence at the Newberry Library in 1983, and was the founder/director of the Newberry Consort until her retirement in 2008. Under her guidance, the consort became know for its innovative programming; it performed nationally and internationally, and made five critically-acclaimed recordings. Mary continues to be a busy teach and independent scholar. During the time she lived in Chicago, she taught at the University of Chicago and Northwestern University. In 2007, she was honored by Early Music America with the Howard Mayer Brown Lifetime Achievement Award.

Katherine Heater has performed throughout the United States, including with the Sun Valley Summer Symphony, The Baroque Chamber Orchestra of Colorado, Catacoustic Consort of Viols in Cincinnati, and at the Berkeley Early Music Festival, The Whidbey Island Music Festival, the Bloomington Early Music Festival, and the Tropical Baroque Festival of Miami. She has performed abroad in Iceland, Taiwan, France, and the Netherlands. Since 1996 Katherine has made her home in the San Francisco Bay Area where she is a frequent performer with early music groups such as Philharmonia Baroque Orchestra, Voices of Music, Musica Pacifica, and Artifice. Ms. Heater received her B.A. in music from UC Berkeley and her M.M. in historical performance from Oberlin Conservatory. Thanks to fellowships from her alma mater and Philanthropic Ventures Foundation, she studied early keyboards at the Sweelinck Conservatorium in Amsterdam. She has taught at the San Francisco Conservatory of Music, San Jose State University, UC Santa Cruz, San Francisco School of the Arts and The Crowden Music Center, as well as at the San Francisco Early Music Society’s summer workshops.