By Jonathan Harris on May 13, 2016 in Uncategorized

. . . at the 2016 Berkeley Festival Exhibition and Marketplace!

Among the lost treasures lamented by those who remember the early days of SFEMS, the late Ken Johnson’s Musica Antiqua holds a high place. It was a wonderful, early music store on California Street in San Francisco, carrying a wide range of historical instruments—winds, strings, percussions, including some quite good, handmade pieces by local builders. There also were recordings, books, paraphernalia and accessories, as well as a huge quantity of sheet music. And of course there was Ken himself and his partner, John Ricci, to guide you through the trove and turn you on to what you never knew you wanted or knew even existed.

Time has not been kind to brick and mortar (or, in the Bay Area, frame and stucco), certainly not to retail music businesses, whether piano companies, record stores, or sheet music shops. Every two years, though, we who are lucky enough to attend the Berkeley Festival are treated to three days of a grand musical bazaar, a cornucopia to overwhelm the senses and quite possibly puncture the purse.

The Exhibition isn’t just a place to buy instruments and scores (scores of instruments, for that matter). It’s a place to peruse and schmooze, to do some serious sifting through boxes of music, to meet some of our leading instrument builders and actually to try out their work. Adriana Breukink, one of the world’s great recorder makers, will be attending for the first time, showing off her new Eagle recorder model as well as her superb Renaissance consort instruments, staples of professional ensembles from Flanders to Farallon. The venerable Prescott and Von Huene workshops will return, and there will a dozen other ateliers, whose craftspeople create everything from harpsichords and organs to violins and viols to oboes, chalumeaux, basset horns, and cornetts. 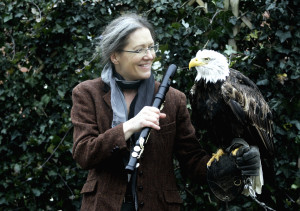 Publishers in attendance will include PRB Productions, Peter Ballinger’s admirable enterprise, which made a significant contribution to our baroque repertory by hunting down, assembling, editing, and publishing the complete second series of Georg Philipp Telemann’s Harmonischer Gottesdienst, as well as publishing many works by living composers for historical instruments. Another will be the Packard Humanities Institute, which has just published the complete works of C.P.E. Bach.

Performing groups, including American Bach Soloists, Philharmonia Baroque Orchestra, and Voices of Music will be selling CDs and subscriptions, while academic and service organizations, including the American Recorder Society, Early Music America, Viola da Gamba Society, and the Longy School will have tables providing information on their programs.

Finally, retailers, including Boulder Early Music and Lazar’s Early Music, will have a wide range of wares for sale, from instruments to sheet music and more.

The Exhibition has been a part of the Berkeley Festival from its very beginning, and its offerings are as emblematic of the state of our art as the Festival’s Main Stage and Fringe concerts. The Exhibition and Marketplace runs from Thursday, June 9 through Saturday, June 11, and will take place in the Large and Small Assembly Halls at the First Congregational Church of Berkeley, 2345 Channing Way (entrance at Dana and Durant). For a full listing of exhibitors, visit the Exhibition page at the Berkeley Festival website.

The Exhibition is open to the public, and admission is free. However, neither SFEMS nor the Berkeley Festival can make guarantees about what it may cost you to leave.