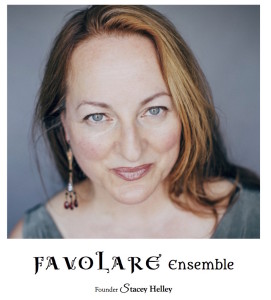 Popular pagan-themed texts were all the rage in counter-reformation Rome circa 1600. The same texts made famous by Monteverdi were set by also set by lesser-known composers and with marked success. This program features the monody and polyphony of Antonio Cifra (1584–1629), Antonio Brunelli (1577–1630) and Ippolito Machiavelli (1568–1619). The beautiful texts are by Petrarch, Guarini, Tasso, and Marino. The many shades of un-requited love, and the ache of longing are the text subjects set in the “new style” of solo song, which also appear in playful, often dramatic, polyphonic arrangements.  Favolare is a revolving ensemble of vocalists and musicians that specialize in lesser-known, under-performed, and rare works of neglected composers before 1700.