Music in the Garden of Delight: Song and Dance of the Medieval Mediterranean 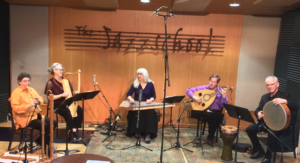 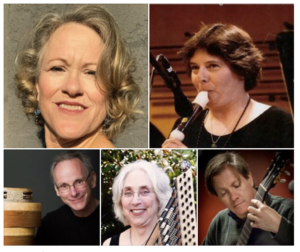 Allison Zelles Lloyd, soprano and medieval harp, has recorded and performed in the United States and Europe, most notably with Steve Reich, Paul Hillier’s Theatre of Voices, American Bach Soloists, Bimbetta, and medieval ensemble Altramar. She earned a Masters of Music degree from the Early Music Institute of Indiana University. Allison performs locally with Vajra Voices, the ABS Choir, Ensemble Alcatraz, Calextone, Flauti Diversi and medieval harp ensemble Angelorum. She also uses her vocal and harp skills in the music education field and has been teaching Music Together and Orff Schulwerk for the last fifteen years. Allison is a lecturer on Early Childhood Music Education at St. Mary’s College through the Montessori department.

Frances Feldon is quite sure she was a troubadour in a former life; in her present existence, she is a conductor, educator, arranger, and performer on early flutes and recorder. She has appeared with American Bach Soloists, California Bach Society, Sonoma Bach, and Jubilate Baroque orchestras. She was a recipient of the Sitka Center for Art and Ecology recorder residency. She directs baroque/contemporary chamber ensemble Flauti Diversi, and is principal conductor of Barbary Coast Recorder Orchestra. Dr Feldon holds a DM in collegium directing from Indiana University’s Early Music Institute. Her recording of Boismortier’s complete Opus 37 trio sonatas is available on CD Baby.

A native of San Francisco, Peter Maund studied percussion at the San Francisco Conservatory of Music and music, folklore and ethnomusicology at the UC Berkeley. A founding member of Ensemble Alcatraz, he has performed with American Bach Soloists, Anonymous 4, Chanticleer, Hesperion XX, Musica Pacifica, Philharmonia Baroque Orchestra and Voices of Music, among others. He is the author of “Percussion” in A Performers Guide to Medieval Music.  Described by the Glasgow Herald as “the most imaginative of percussionists,” he can be heard on over 60 recordings.

Qanun player Sarah Michael received her Bachelor of Music degree in music history from San Francisco State University in 1976, and her M.A. in Composition from Mills College in Oakland, California in 1994. She performed extensively on the viola da gamba, and composed many chamber works and several orchestral pieces that received local performances. For the last fifteen years she has been playing and studying Middle Eastern music, primarily with the great composer and accordion virtuoso Elias Lammam. She has perfomed with groups including Aswat, Flowers of the Nile, Elias Lammam ensemble, the Mevlevi Mutrib, El Alzifoon, and her own quartet, Zam89anna.

Termed “a prominent guitarist,” by the New York Times, David Rogers, oud, maintains an active solo and ensemble career as a classical guitarist and performer on early plucked strings, and fuses classical, jazz, early, and world music elements into his performances of both original and traditional repertoire. He has taught master classes throughout the US, including San Francsico Conservatory, USC and Interlochen. He was musician with the Oregon Shakespeare Festival for 18 years, and directed classical/jazz guitar studies at Southern Oregon University for 13 years. Mr Rogers studied historical plucked strings with Hopkinson Smith and Eugen Dombois at the Schola Cantorum Basiliensis; Thomas Binkley at Indiana Uiversity; Lyle Nordstrom at Oakland University; and classical guitar with Joseph Fava at Wayne State University. He has recorded for Dorian, Callisto and Focus.