“Franklin Lei brought together the wisdom of interpretation and simultaneous dynamic shadings with speed and acrobatics of the left hand, in a perfect performance presented standing up, as in Bach’s time”
Judith Lebküchner-Neugebauer, Thüringer Allgemeine (Erfurt, Germany), 6 December 2017 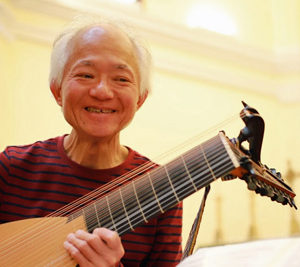 To commemorate J.S. Bach’s 333th birth year, “Bach in Dornheim” is a repeat of Franklin Lei’s November 17, 2017 performance at St. Bartholomäus in Dornheim, Germany. In this small church Bach was married on October 17, 1707 to his second cousin Maria Barbara. Both BWV 995, which Bach himself transcribed from his Fifth Cello Suite, and BWV 1004 which concludes with the famous Chaconne, were composed in times of great sorrow in 1720, when Maria Barbara died. Both will be played on a 13-course Baroque lute of the type Bach himself owned.

Franklin studied Renaissance and Baroque lutes at the Musikhochschule Rheinland in Cologne under Michael Schäffer, and at the Schola Cantorum Basiliensis under Eugen Dombois and Hopkinson Smith. In 1979, after his first international tour of London, Leicester and Copenhagen, he made his festival debut in Trinity Chamber Concerts’ Festival of Guitars (and One Lute…) It was the beginning of many interesting festival appearances– The Guild of American Luthiers’ 5th Convention at the Palace of Fine Arts (1980), Blutenburger Gitarrentage in Munich (1982), the first China International Guitar Festival (1987) in Zhuhai, Berkeley Festival (1990 and 1998), Tage Alter Musik Regensburg (1989), San Francisco Jewish Music Festival (1998), and Melbourne Autumn Music Festival (2000).

He recorded CDs for the Marco Polo, Naxos and Stradivarius labels, and broadcasts for Bavarian Radio, South German Radio SDR, Radio Television Hong Kong, Austrian Radio ORF, National Public Radio Washington DC, and Belgian Television BRT. Franklin was lute instructor at Chinese University of Hong Kong from 1986 to 1994. He also conducted master classes at Humboldt State University, CSU Long Beach, and Hong Kong Baptist University. In 2008 he joined the staff of the University Library at Berkeley. Beginning in 2013, he has toured internationally every November. In November 2017 Franklin performed an all-Bach recital in Cologne’s 12th-century St. Ursula Basilika , in Macau’s Igreja de São José (1758), and in St. Bartholomäus of Dornheim, the church where J.S. Bach was married on 17 October 1707.