King Charles’ Delight: Suites and Fantasies by Coprario and Jenkins for 2 bass viols to the organ

This program of the rare and virtuosic repertoire for 2 bass viols and organ was written for the “private music” of King Charles I.  Jenkins and Coprario were virtuoso viol players and innovative composers working in an extraordinarily supportive milieu. King Charles loved and played the viol, and spent lavishly on new compositions for the instrument. It was a time of plenty for the viol, such as had never been seen before (and was never seen again) in England.

Hallifax & Jeffrey (viols) and Andrew Canepa (organ) have made a specialty of these pieces, and St. Mark’s parish hall is the perfect acoustic for it. If you’re not familiar with the music, you’ll be astonished. If you know it well, you’ll enjoy it even more. 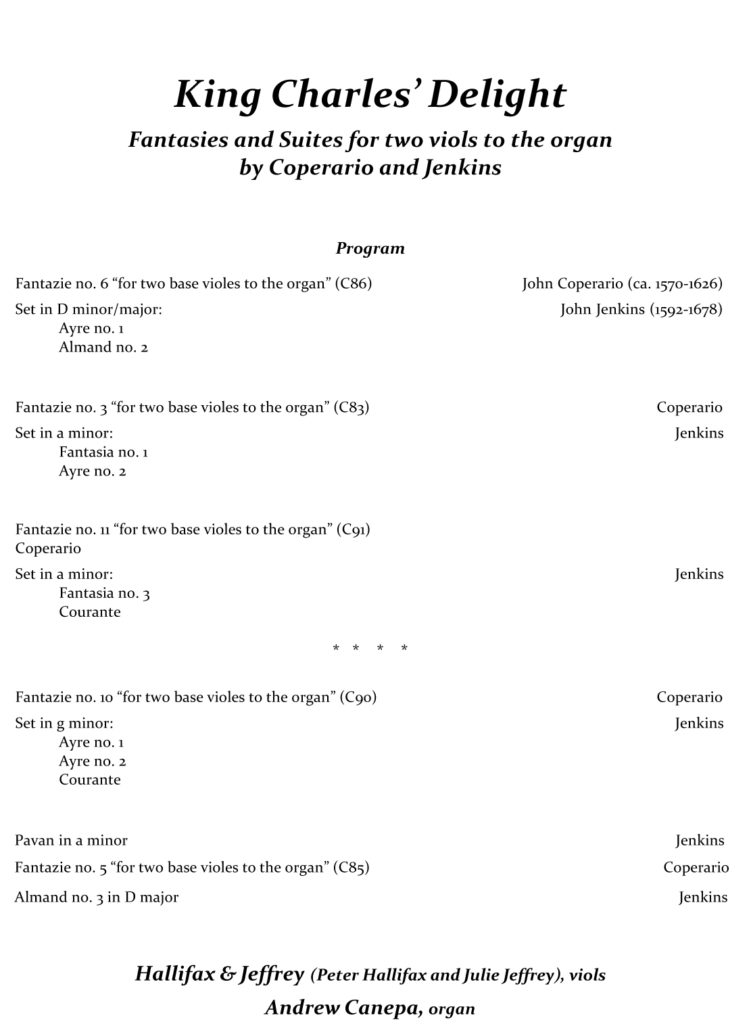 JULIE JEFFREY has been playing the viol since 1976. She has performed throughout the U.S., in Canada, Mexico, Europe and Australia, and teaches privately and at workshops in the U.S. and abroad. Ms. Jeffrey is a member of Sex Chordae Consort of Viols, founder and creative mastermind of Wildcat Viols, and embodies half of the viol duo Hallifax & Jeffrey. She is co-founder and co-director of Barefoot Chamber Concerts, has served on the Viola da Gamba Society of America board of directors, and is a co-founder and active member of the Viola da Gamba Society, Pacifica Chapter.

Bay Area trained early musician and pianist ANDREW CANEPA works within an exciting early music community in the Bay Area, performing music from the medieval period to the 20th Century as a conductor, harpsichordist, organist, percussionist and pianist. Graduating at the top of his class from the University of Colorado in Boulder with both Bachelor of Music and Master of Music Degrees in piano performance, Maestro Canepa  soon after moved to San Francisco to further his studies in keyboard technique, and to begin studies in conducting with Charlene Archibeque at San Jose State, and Marika Kuzma at University of California, Berkeley; at the same time, he began studying vocal  technique with Susan Gundunas. It was in the Bay Area that he discovered the fascinating world of early music and began acquiring knowledge of the period with medieval and renaissance percussionist Peter Maund. Ever eager to expand his store of knowledge,  he continues to explore the intricacies of the period, especially early keyboard music, under the tutelage of harpsichord and organ Maestra, Hanneke Van Proosdij, and is becoming an expert in the Taubman keyboard technique, studying with both Marc Steiner in San Pablo, CA and John Bloomfield in New York City.   M. Canepa is also a former piano student of Sarah Beth Hinders, Frank Wiens, Alvin Chow, Angela Cheng, Larry Graham, and Mack McCray.

Keen to utilize this vast body of accumulated knowledge, M. Canepa enthusiastically conducts a wide variety of talented Bay Area musicians, and performs harpsichord and organ continuo in a number of early music ensembles. In addition to his peripatetic performing schedule, Msto. Canepa holds a full time position as Director of Music Ministry at St Mary Magdalen Church in Berkeley, where over the last 12 years, he has built a vibrant and exciting sacred early music program. In addition to performing, Msto. Canepa continues his vocal studies with vocal teacher Beth Amisano, is building an exciting studio of piano students, and coaches singers and chamber ensembles from throughout Bay Area.