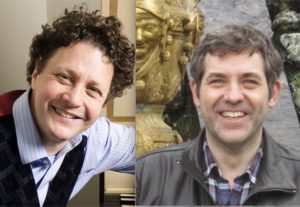 Jory Vinikour is recognized as one of the outstanding harpsichordists of his generation. A highly-diversified career takes him to the world’s most important festivals, concert halls, and opera houses as recitalist and concerto soloist, partner to many of today’s finest instrumental and vocal artists, coach, and conductor.

Born in Chicago, Jory Vinikour came to Paris on a Fulbright scholarship to study with Huguette Dreyfus and Kenneth Gilbert. First Prizes in the International Harpsichord Competitions of Warsaw (1993) and the Prague Spring Festival (1994) brought him to the public’s attention, and he has since appeared in festivals and concert series throughout much of the world.

Well-known as an accompanist, he has worked extensively with artists such as David Daniels, Hélène Delavault, Vivica Genaux, Magdalena Kožená, Annick Massis, Marijana Mijanovic, Dorothea Röschmann, and Rolando Villazón. He has accompanied legendary Swedish mezzo-soprano Anne Sofie von Otter in recitals in Sweden, Norway, Spain, and Paris, as well as at Milan’s storied Teatro alla Scala. With lutenist Jakob Lindberg, their programme of English and Italian music of the 17th Century, entitled Music for a While, was released by Deutsche Grammophon in early 2005.

After simultaneously studying harpsichord with Kenneth Gilbert at the Conservatoire National Supérieur de Musique de Paris, where he was awarded a premier prix, and earning a degree in musicology at the Sorbonne, gifted harpsichordist, organist, and musicologist Philippe LeRoy continued his studies with revered pedagogue Huguette Dreyfus. In addition to special studies under the tutelage of Early Music pioneer Gustav Leonhardt, he participated as an honors student in the prestigious and competitive postgraduate department of the Paris Conservatory, the Troisième cycle/cycle de perfectionnement, in which he took part in the fortepiano class of Patrick Cohen.

An organ student of Olivier Latry and scholar of Baroque organ repertoire under the supervision of Gilbert and Leonhardt, Philippe has participated in several respected European institutions’ summer courses, including Sienna’s Accademia Musicale Chigiana, Académie musicale de Villecroze, and Académie musicale de clavecin de Clisson. In 1998, he received the top prize of the International Harpsichord Competition in Warsaw, followed in 2000 by victory in the Twelfth Bach Competition in Leipzig, where he was also awarded the Mitteldeutscher Rundfunks Special Audience Prize.

Philippe has been heard in performance as a solo harpsichordist throughout Europe, and as an organist specializing in Baroque repertoire he favors French, Spanish, and Italian music of the Sixteenth through Eighteenth Centuries. He has performed on France Musique/Radio France on several occasions, and his début recording was sponsored by the French Association for Artistic Action (now Culture France) as part of their series Declic, dedicated to young French winners of international music competitions. From that start, his subsequent recordings have received numerous accolades: his 2007 recording of the rarely-heard complete works of Armand-Louis Couperin on the Syrius label was named Best Instrumental Recording of the Year by online magazine NewOlde.com, and his recordings of J. S. Bach’s concerti for two and four harpsichords under the direction of Didier Talpain and virtuoso sonatas by Sebastián de Albero and Padre Antonio Soler were welcomed with rave reviews. Philippe’s and Jory’s recording of Padre Antonio Soler’s Six Concerti for Two Keyboards was released on the Delos label on 12 August 2016.

Philippe shares his encyclopedic knowledge of and affection for Baroque repertory with the Great Lakes region by serving as GLB’s Director of Programming.