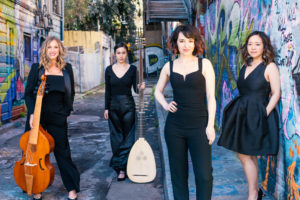 Liaison Ensemble celebrates women composers of the Baroque in a program by Barbara Strozzi, Francesca Caccini, and their contemporaries. The French phrase querelle des femmes, “the woman question”, refers to a debate started in 1500 by the philosopher Agrippa about the virtue of women. He argued that the oppression of women by men was due not to natural reasons, but socially constructed ones. Liaison celebrates the voices of admired female composers of the time, whose music rose to prominence despite adversity. Join them for an afternoon of song and wine at The Musical Offering. 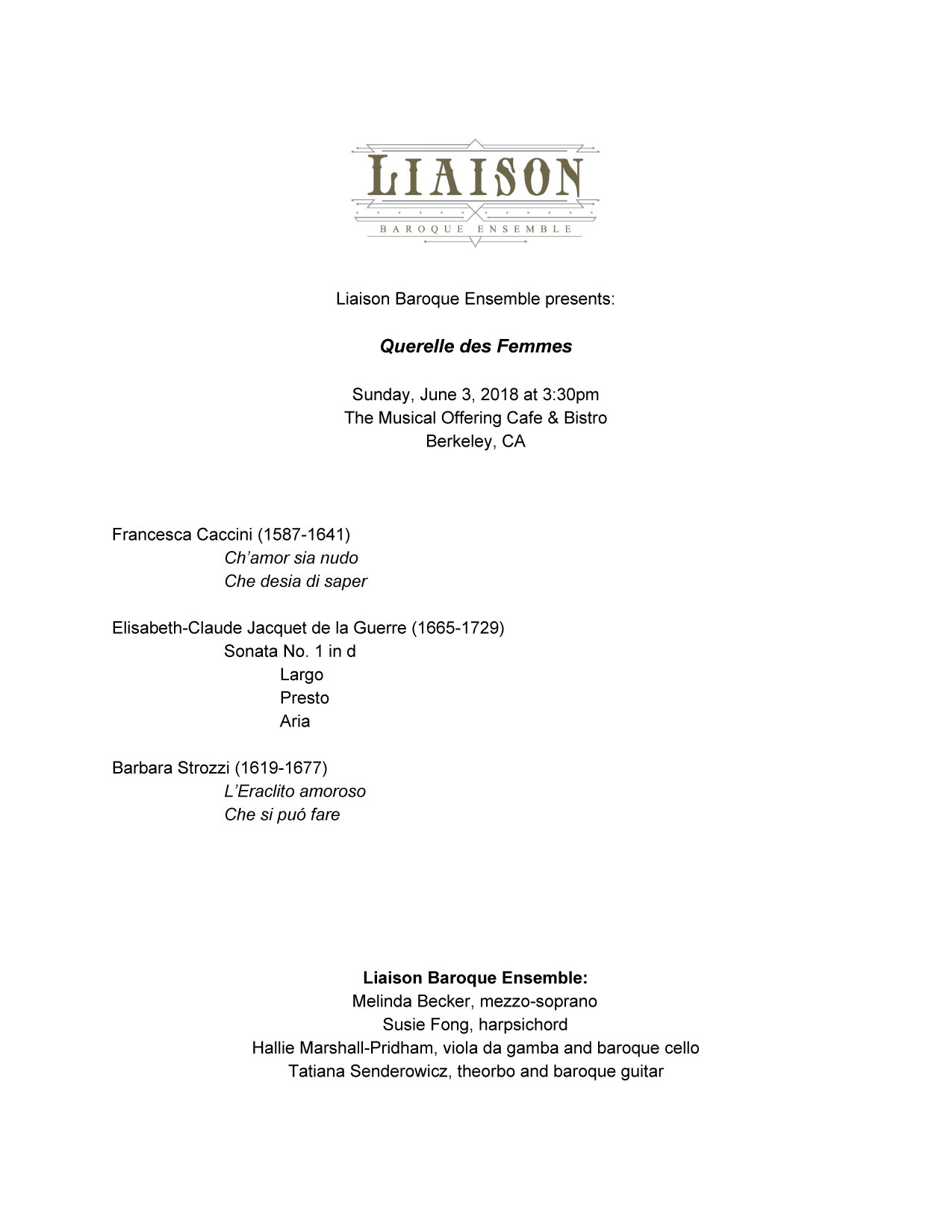 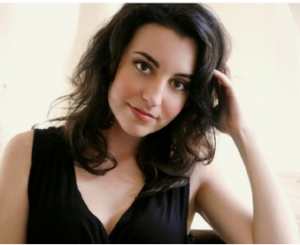 A versatile singer, Melinda Becker enjoys performing a multi-faceted repertoire, from Baroque cantatas and Spanish and Ladino art songs, to Soul and other popular music styles. Her performance work has taken her beyond the Bay Area, singing for audiences in Spain, Portugal, Egypt, and France.

She recently performed as the alto soloist in Beethoven’s Symphony No. 9 with Classical Revolution Orchestra, and frequently collaborates with many Bay Area musicians, most recently Oakland-based Jazz band RDL+ and Iranian singer Mahsa Vahdat.
Active with several chamber groups, she is a member of Renegade Duo with guitarist Jon Mendle and Liaison Ensemble, a female Baroque quartet bringing historically-informed performances to a wide range of audiences in non-traditional venues. With a passion for Latin music, she performs with Community Music Center’s Cuban Charanga Ensemble.

Her operatic performances include the role of Cherubino in Le Nozze di Figaro, Hansel in Hansel and Gretel and Nireno in Giulio Cesare. She appeared with Opera San Jose as the Page in Rigoletto and First Spirit in The Magic Flute. Other roles performed include the Page (Rigoletto) with Bayshore Lyric Opera, Anne Frank (Yours, Anne), and Amahl (Amahl and the Night Visitors).

Melinda earned her Master of Music Degree at the San Francisco Conservatory of Music studying vocal performance with Catherine Cook, and pursued her interest in folk-based chamber music at the Conservatoire de Strasbourg in France. She holds a Bachelor of Arts in Music and a Masters degree in Education from Santa Clara University. She closely studied and performed Spanish chamber music and art song in Spain at the Escuela Superior de Canto in Madrid through Project Canción Española and at Música en Compostela in Santiago de Compostela. An active educator, she formerly served as vocal instructor, lecturer, choral director, and liturgical music director at Marymount California University, and taught at Université de Strasbourg in France. She is currently on music faculty at the French American International School in San Francisco. 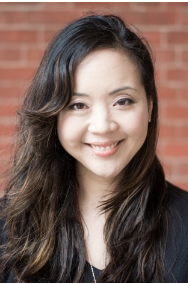 Susie Fong has an M.M. in Harpsichord Performance from the San Francisco Conservatory of Music, where she studied with Corey Jamason, and received her B.A. in Music at the University of California at Berkeley, where in addition to playing piano and chamber music, she studied harpsichord with Laurette Goldberg and played in the Collegium Musicum. She is also an accomplished solo and chamber pianist, having studied with Audrey Grigsby and Robert Rios in Southern California. Susie currently teaches piano and harpsichord privately in San Francisco.

Besides teaching piano and harpsichord, Susie is active both as a harpsichord soloist and continuo player and has participated in such festivals and workshops as Tafelmusik Baroque Summer Institute, American Bach Soloists Summer Academy, Vancouver Early Music Festival, and SFEMS. She performs regularly as part of Liaison, and has played with such groups as the Vinaccesi Ensemble, the Handel Opera Project, Classical Revolution, the Pacific Chamber Symphony, Bay Area Classical Harmonies, and the San Francisco Bach Choir. Susie has recorded with the Vinaccesi Ensemble and can be heard on their Centaur Records CD, Benedetto Vinaccesi: The Solo Cantatas. 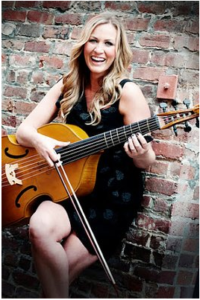 Hallie Pridham holds a B.M. from the San Francisco Conservatory of Music in Cello Performance where she studied baroque cello and viola da gamba with Elisabeth Reed and modern cello with Jean-Michel Fonteneu. She received her high school diploma from Idyllwild Arts Academy.

Hallie was winner of the IAA Concerto Competition in 2004 and winner of the SFCM Baroque Concerto Competition in 2010. She was also the recipient of the SFCM Baroque Ensemble Outstanding Achievement Award and was chosen to perform a broadcasted concert at the John F. Kennedy Center as part of a Conservatory Concert Series. As both a cellist and viola da gambist, Hallie has performed with many groups in the Bay Area. She participated with full scholarship in the American Bach Soloists Academy and has since performed with ABS during their professional sesason. She also regularly performs with San Francisco Bach Choir under the direction of Corey Jamason. In 2011, Hallie was honored to play the viola da gamba solo in the west coast premier of Philip Hersant’s setting of Psalm 130, directed by Ragnar Bohlin. San Francisco Classical Voice described her playing as having a “…warm and reedy sound.” 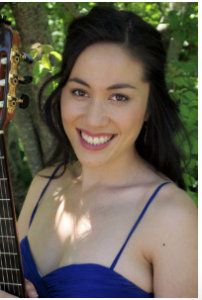 Tatiana Senderowicz is a solo and chamber musician who has performed a wide variety of repertoire. She is a winner of the American String Teacher’s Association (ASTA) San Francisco Bay Area Chapter Competition and was the only contestant from the United States to have been selected as a semi-finalist to participate in the 2011 Barrios WorldWideWeb Competition. In Spring of 2013 Tatiana was chosen to perform at the Guitarrada, an event hosted by Pepe Romero and the San Francisco Conservatory’s Guitar Department where she had the opportunity to perform on a Hauser I guitar from the John Harris Guitar Collection.

Tatiana has participated in masterclasses with David Russell, Nigel North, Odair Assad, Wieland Kuijken, and SoloDuo. Senderowicz studied with Larry Ferrara and David Tanenbaum at the San Francisco Conservatory where she earned both her Bachelor and Master of Music degrees with a Secondary Emphasis on Historical Plucked Strings.