The motets of Franco-Flemish composers during the Renaissance were esteemed throughout Europe for their balanced vocal polyphony and dark, rich sonorities. The Choir of Trinity Wall Street surveys over a century of musical development in one program, from Dufay’s medieval, architectural Nuper rosarum flores to the imitative mastery of Josquin and Gombert.

About the Choir of Trinity Wall Street 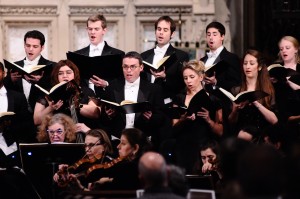 The Trinity Choir, the premier ensemble of the Music and Arts program at Trinity Wall Street, is both a beloved church choir, singing favorite Anglican hymns and historic sacred music, and one of New York City’s most celebrated professional vocal ensembles, performing in concerts throughout the year. The New York Times has remarked that the choir possesses “voices so pure they suggest a seraphic chorus beyond the human sphere.” Under the direction of Grammy-nominated composer-conductor Julian Wachner, the choir’s renowned presentations of Handel’s Messiah annually top critics’ picks, and they received a Grammy nomination in 2012 for their recording of Handel’s Israel in Egypt. In December 2013, Wachner leads the Trinity Choir and Trinity Baroque Orchestra in Handel’s Messiah at Lincoln Center’s Alice Tully Hall. The subsequent Twelfth Night Festival celebrates the twelve days of the nativity with seasonal Bach cantatas. The choir has made recordings for NAXOS (Haydn: The Complete Masses, Handel’s Messiah, and Christmas from Trinity) and Musica Omnia (J.S. Bach: Complete Motets). They’ve collaborated with a number of famed guest conductors and guest artists such as Frederica Von Stade, Joyce DiDonato, Gil Shaham, Luca Pisaroni, Angela Meade, Anthony Roth Costanzo, and Melanie DeMore. Previous Music Directors at Trinity include Dr. J. Owen Burdick (1990-2008), Dr. Larry King (1968-1989), and George Mead (1941-1968). Trinity’s Contemporary Music Orchestra, NOVUS NY, established by Wachner in 2011, is comprised of innovative New Music players from around the world.

In March 2010, the choir traveled to Moscow to perform Purcell’s Dido and Aeneas with the Mark Morris Dance Group. Trinity’s shared observances of the 10th anniversary of the events of September 11, 2001 included several moving performances as part of a week of events entitled “Remember to Love.” In March of 2011, Trinity began Bach at One, a weekly cantata series at Trinity’s St. Paul’s Chapel. Bach at One has quickly become a favorite destination each Monday for New Yorkers and visitors alike. Particularly well-versed in major compositions of the Baroque and Classical periods, the choir’s repertoire also includes Baltic choral music as well as works by Britten, Brahms, Howells, Pärt, and other contemporary composers, including several premieres of New Music in their Sunday evening Compline services.

Trinity Choir has performed at The Metropolitan Museum of Art, The Cloisters, and The Tribeca Film Festival, which invited the choir to perform Arvo Pärt’s Passio in a mixed-media collaboration with Paolo Cherchi Usai’s film of the same name. The 2013 Britten Festival at Trinity celebrates the composer’s centennial season with an “epic, ninety-five-work Britten series” (Alex Ross, The Rest is Noise). Trinity Wall Street’s November 2013 production of Britten’s Great War Requiem at the Kennedy Center met with “enthusiastic, and deserved, applause…What [Wachner] offered was on a level that showed once again that he is a full-blown conductor who happens to conduct choruses, rather than that tricky appellation, a ‘choral conductor’” (Anne Midgette, Washington Post). In November 2013, the choir will sing in the BAM Next Wave Festival, and Wachner makes his Juilliard debut leading a production of Georg Frideric Handel’s Radamisto.