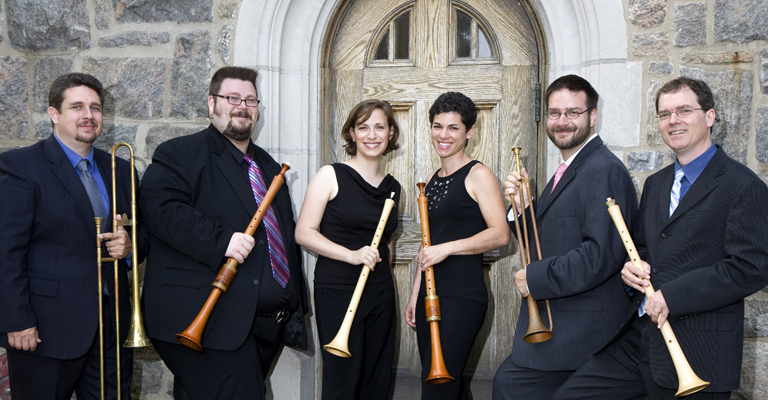 Praised for performing intricate fifteenth-century counterpoint “with the ease of jazz musicians improvising on a theme,” Ciaramella brings to life medieval and early Renaissance music from historical events and manuscripts. Its members are united by the conviction that every composition conceals a rich story waiting to be unlocked through historical research and speculative performance. Founded on a core of winds—shawm, sackbut, recorder, organ, and voice—Ciaramella takes its name from the Italian shawm and from a fifteenth-century song about a beautiful girl whose clothes are full of holes. When she opens her mouth, she knocks men flat.

Directed by Adam and Rotem Gilbert, from the Early Music Program at USC Thornton School of Music in Los Angeles, the ensemble performs at major festivals throughout the United States, Italy, and Germany. Performances have included the Cleveland Museum of Art, Bloomington Early Music Festival, Oberlin’s Baroque Performance Institute, the Lute Society of America, the American Musicological Society in Seattle, and on early music series in Cleveland, San Francisco, San Diego, Houston, Arizona, Early Music in Columbus, Salt Lake City, Seattle’s Early Music Guild, the Connecticut Early Music Festival, Amherst Early Music Festival, Renaissance and Baroque Society of Pittsburgh and the Early Music Society of the Islands in Victoria, BC. In 2007 they gave their New York debut at Music Before 1800 and performed at the Tage Alter Musik Festival in Regensburg. Recently the group has performed for Early Music Hawaii, and has created programs for Mission San Antonio, Mission Santa Barbara, the Getty Museum, and for Da Camera Society’s “Chamber Music in Historic Sites” in Los Angeles.

Ciaramella released its debut CD Sacred and Secular Music from Renaissance Germany for Naxos (2006) and Treasures of Burgundy for Yarlung Records (2009). Their third album, Variations on Moveable Ground has been released in October, 2013. Ciaramella is now proudly based in Los Angeles.

For more information on the group visit www.ciaramella.org.