Davis Senior High School, located just northeast of the Bay Area in Davis, CA, established the first Baroque orchestra in a public high school in the US. Come hear them in a specially priced afternoon concert at the Berkeley Festival, playing some of the most widely known and loved works of the Baroque era. 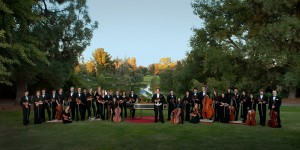 To date, the Davis High School Orchestra Program has grown to four times its original size over the past 12 years while under the direction of conductor Angelo Moreno. By 2008, the program had evolved into two groups: the Chamber Orchestra, a non-audition strings orchestra with a current enrollment of 55 students; and the Symphony Orchestra, an auditioned full orchestra comprised of 75 students. With the continual growth and influx from feeder schools at the elementary and middle school levels, it became necessary to create a third component to the orchestra program. Thus, the Davis Senior High School Baroque Ensemble was created.

A vision of Angelo Moreno’s for 10 years and now a reality, the DHS Baroque Ensemble is truly a one-of-a-kind experience. In fact, it was the first ensemble of its kind at the public school level in the United States. Allowing the students to work in a smaller, chamber-size format, the Baroque ensemble transcends the boundaries of a “music class” and informs many other disciplines, such as history and art. The students play on instruments that have been converted to the style of the period, giving them the opportunity to experience a historically accurate performance environment. The students have access to an entire library of music that would otherwise have been inaccessible within the performance constraints of the program prior to the Baroque Ensemble’s creation.

The development and continuation of this extraordinary educational experience is possible only with the strong support from our administrators, teachers, district, the school board, the parents, and, of course the students. Unfortunately, at the outset there were no grants or monetary support from the district. It was through the assiduous fundraising efforts of DSOMA (Davis Schools Orchestral Music Association)—a nonprofit booster organization—that the DHS Baroque Ensemble was able to get up and running. With money funneling into DSOMA from the community and the parents, it was possible to retrofit and convert all the instruments needed to form the group, as well as to purchase Baroque bows, add gut strings to all instruments, and acquire new music specifically for the ensemble. The financial assistance from DSOMA also enabled the ensemble to purchase a professional-level John Phillips (1991) harpsichord.

Another vital source of support and inspiration for the Baroque Ensemble comes from the continuing participation of Angelo Moreno’s mentors from the U.C. Davis Department of Music, Phebe Craig and Michael Sand. Once per week, Ms. Craig coaches the harpsichord students individually and with the group as part of rehearsal. Because her generosity and that of so many others, the Baroque Ensemble is now a thriving, thoroughly enriching musical entity at Davis Senior High School.