Lutenist Hopkinson Smith performs his own realization of the first three Cello Suites by J.S. Bach on German theorbo. 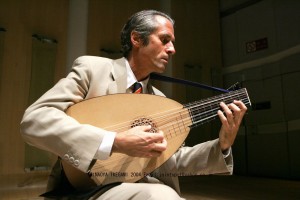 Born in New York in 1946, Hopkinson Smith graduated from Harvard with Honors in Music in 1972.  The next year he came to Europe to study with Emilio Pujol in Catalonia and Eugen Dombois in Switzerland.  He then became involved in numerous chamber music projects including the founding of the ensemble Hespèrion XX.  Since the mid-80’s, he has focused almost exclusively on the solo repertoires for early plucked instruments producing a series of prize-winning recordings for Astrée.  These feature Spanish music for vihuela and baroque guitar, French lute music of the Renaissance and baroque, early 17th century Italian music and the German high baroque.

The recording of his lute arrangements of the Bach solo violin Sonatas and Partitas, released in the year 2000, has been universally acclaimed by the press.  Gramophone magazine called it “the best recording of these works on any instrument”.  A Dowland recording, out since early 2005, won a Diapason d’Or and was called ‘wonderfully personal’ in a review in the New York Times.   A recording with music from the world of Francesco da Milano, was awarded a Diapason d’Or de l’Année (the French equivalent of a Grammy award) in November 2009 and has been called “the first recording to do justice to Francesco’s reputation.”  A CD with the first three Bach ‘cello Suites played on the German Theorbo was released in early 2013, has also won a Diapason d’Or and was called “totally riveting” in the BBC Music Magazine.

Hopkinson Smith has performed and given master classes throughout eastern and western Europe, North and South America, Australia, Korea and Japan sometimes combining the life-style of a hermit with that of a gypsy.  In 2007 and 2009, he gave concerts and workshops in Palestine under the auspices of the Barenboim-Said Foundation and the Swiss Arts Council. In 2010, he received the music prize from the Italian Region of Puglia with the inscription “maestro dei maestri, massimo interprete delle musiche per liuto dell’antica Europa Mediterranea”.  He teaches at the Schola Cantorum Basiliensis.

The ‘official’ Bach works for the lute are primarily individual 18th century arrangements which were never conceived of as a unit (as were, for instance, the English and French Suites for keyboard or the ‘cello Suites or the violin Sonatas and Partitas).  Some of these lute adaptations were by Bach himself (BWV 995 based on the fifth ‘cello Suite or BWV 1006a from the third violin Partita) and others come from his circle.  My own adaptations of Bach works for the lute include a recording of the fourth and sixth ‘cello Suites for the lute released in the early nineties and the double CD of my arrangements of the complete violin Sonatas and Partitas which came out in 2000.  Gramophone magazine generously called this “the best recording of these works on any instrument”.

The first three ‘cello Suites, quite different from the last three, have a unique melodic charm and a singular energy. I have long pondered the best way to realize these works on a plucked instrument.  I feel that the baroque lute lacks the depth and nobility that the ‘cello range can give, and that the French/Italian theorbo is too much of a historical, geographical and aesthetic anomaly for this repertoire.  A solution which I think is more satisfying on all counts is the German theorbo.  It has a longer string length and is tuned a third lower than the baroque lute, giving it more resonance and bringing it closer to the poetic world of the ‘cello, and its double-strung basses (where the low note is reinforced by a note an octave higher) give an added eloquence which the single strung French/Italian variant does not have.