This Sweet and Merry Month: English Consort Songs for Voice and Viols

Elizabethan and Jacobean love songs, laments, pastorals, and sometimes bawdy songs can all be found in the consort song for solo voice and four viols. This program will present a broad survey of this indigenous English genre by William Byrd and his contemporaries.

Please note: Soprano Christine Brandes will be performing with Sex Chordæ Consort of Viols. She replaces Julianne Baird, who is ill, in a rare program of Renaissance delights with the Bay Area’s most celebrated viol consort. 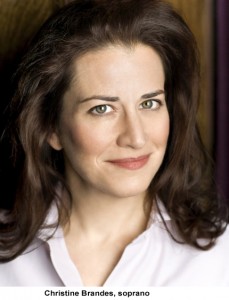 Noted for her radiant, crystalline voice and superb musicianship, soprano Christine Brandes brings hercommitted artistry to repertoire ranging from the 17th century to newly composed works and enjoys an active career in North America and abroad, performing at many of the world’s most distinguished festivals and concert series in programs spanning from recitals and chamber music to oratorio and opera.

Highlights of Christine Brandes’ 2013-14 season include Debussy’s La Damoiselle élue with the Indianapolis Symphony Orchestra conducted by Carlo Rizzi, a program of Bernstein’s Symphony No. 1 Jeremiah and Haydn’s Mass No. 10 in C major Paukenmesse with the Santa Rosa Symphony led by Bruno Ferrandis, and performances at the 92nd Street Y in New York City with the Brentano String Quartet.

Last season Ms. Brandes gave a series of important premieres including an Eric Moe commission entitled Of Color Braided All Desire with the Brentano String Quartet as part of the South Mountain Concert Series, and Jennifer Higdon’s In the Shadow of Sirius, based on poetry of former American Poet Laureate, W.S. Merwin with the Cypress String Quartet at the Herbst Theatre in San Francisco.

During recent seasons, Ms. Brandes appeared at Washington National Opera as Despina in Così fan tutte conducted by Philippe Auguin and as Catherine in William Bolcom’s A View from the Bridge and made returns to Portland Opera in Così fan tutte, to Central City Opera as Maria Corona in Gian CarloMenotti’s The Saint of Bleecker Street, and to Seattle Opera as Pamina in Mozart’s Die Zauberflöte under the baton of Gary Thor Wedow in a new production directed by Chris Alexander. She also bowed with Arizona Opera as the title role in Gluck’s Orfeo ed Euridice, conducted by Joel Revzen, and with the Lyric Opera of Kansas City as Cleopatra in Giulio Cesare and as The Governess in The Turn of the Screw.

Simon Rattle, both with the Philadelphia Orchestra, Mozart opera arias and Strauss orchestral songs with the National Symphony Orchestra and Heinz Fricke, Bach Cantatas with the New World Symphony Orchestra, a recording and European tour of Jomelli’s Ezio with world renowned baroque orchestra Il Complesso Barocco under the baton of Alan Curtis, Handel’s Messiah with the Toronto Symphony, the New York Philharmonic, Tafelmusik, and the Minnesota Orchestra, Carmina Burana with the Houston Symphony, Bach’s St. Matthew Passion with Jane Glover and the Music of the Baroque, Haydn’s Mass in the Time of War with Bernard Labadie and the San Francisco Symphony Orchestra, Pergolesi’s Stabat Mater with Neeme Järvi and the Detroit Symphony, and Barber’s Knoxville: Summer of 1915, and Mahler’s Symphony No. 4 with Andreas Delfs and the Milwaukee Symphony, the Canton Symphony, and paired with Berg’s Lulu Suite with the Santa Rosa Symphony. She also has bowed at Lincoln Center’s

Mostly Mozart Festival and at the Ravinia Festival with the Philharmonia Baroque Orchestra as well as with the Orpheus Chamber Orchestra, Ensemble Orchestral de Paris, Chamber Music Society of Lincoln Center, Freiburger Barockorchester, and the Handel & Haydn Society, Pacific Symphony and Arion Baroque Orchestra in Montreal, as well as a residency with the Oregon Bach Festival with performances of several Bach Cantatas and a semi-staged version of Honegger’s Jeanne d’Arc under the batons of Helmuth Rilling and Marin Alsop respectively, among others. Christine Brandes’ operatic career has been highlighted by engagements at Houston Grand Opera in Ariodante with Christopher Hogwood and in Falstaff with Patrick Summers, at Seattle Opera in Giulio Cesare, and at the Los Angeles Opera in L’Incoronazione di Poppea with Harry Bicket and in Hänsel und Gretel with Alan Gilbert. Additional performances of the artist’s distinguished career have brought her to San Diego Opera in Ariodante, Central City Opera in L’Incoronazione di Poppea, Lisbon’s Gulbenkian Foundation in Così fan tutte, Opera Theatre of St. Louis in Cimarosa’s The Secret Marriage, Portland Opera in Così fan tutte, Glimmerglass Opera both in Handel’s Orlando and Acis and Galatea, San Francisco Opera in Semele under the baton of Sir Charles Mackerras, the Opéra de Nancy in Alcina, New York City Opera in Acis and Galatea and Platée, and to the Opera Company of Philadelphia in Die Zauberflöte, L’Elisir d’amore, and Don Giovanni. Ms. Brandes has performed Le nozze di Figaro with New York City Opera, Seattle Opera, Opera Pacific, and with the opera companies of Minnesota, Montréal, Philadelphia, and Québec.

Sex Chordæ Consort of Viols was founded by John Dornenburg for the purpose of performing and recording the vast literature for viol consort of the 16th and 17th centuries, as well as other works from the period such as Renaissance chansons, consort songs, Italian madrigals, English verse anthems, and German cantatas. The consort has performed widely in the San Francisco Bay Area with presenters including the Berkeley Early Music Festival, San Francisco Early Music Society, San Jose Chamber Music Society, Santa Cruz Baroque Festival, and Magnificat. In the USA they have toured from Los Angeles to Lancaster, Pennsylvania, and made their European debut at the Tage Alter Musik Festival in Regensburg, Germany. Sex Chordæ has recorded three critically acclaimed compact discs for the Centaur label: J.H. Schein Banchetto musicale, Claudio Monteverdi Third Book of Madrigals for Viol Consort, and Josquin Des Prez/Heinrich Isaac Music of the Renaissance.