Tekla Cunningham, violin, Vijay Chalasani, viola, and Nathan Whittaker join forces in celebration of the string trio. Often neglected next to its “big brother” the string quartet, string trios allow space for a playfulness that is sure to delight. Featuring the Trio Concertant in B-flat Major, Op. 1 No. 1 by Alessandro Rolla  and Beethoven’s String Trio in G Major, Op. 9 No. 1.

History favors the victors, or so the saying goes. In the case of classical era chamber music genres, the string quartet quickly took over, favored especially for its weighty intellectual conversations and revolutionary sense of equality during a time of change in Europe, in which each of those aspects were vitally important. Modern audiences and musicians tend to forget that as music-making in the home was expanding in popularity in the mid-late 18th century, composers were writing for a rapidly expanding palette of instrumental combinations in order to meet the growing demand of both amateur and professional musicians. One of these many genres was the string trio, typically comprised of a violin, viola, and cello. The slender yet substantial string trio combined the best qualities of its smaller cousins such as the duo or accompanied sonata, with their transparent galant textures, as well as the larger quartets and quintets, with their emphasis on musical dialogue and ample harmonies. Composers often wrote string trios that, like quartets, were dependent on the violin for melodies while the viola and cello accompanied, but were also sometimes written as trio concertants, which spread the solo melodic responsibility more equally among the three instruments. As tastes changed in the early 19th century, the string trio simply couldn’t keep up with its more versatile big brother the string quartet, and it quickly faded away until experiencing a renaissance in the 20th century, when modernist composers again came to value its clarity of texture and expressive possibilities. As we look back at music of the classical era, the string trio makes a perfect representative for galant music, with its ease and space for playfulness yet room for expansiveness and breadth of feeling. We hope you enjoy this exploration into an underappreciated genre of chamber music that is sure to both delight and surprise, and perhaps make you forget about those old quartets for a moment!

Like the string trio genre itself, the violinist, violist, teacher, and composer Alessandro Rolla was unjustly left behind by history’s remembrance. Born in Pavia, Italy, he was solo violist and later concertmaster with the orchestra of the Duke of Parma before eventually moving to Milan, where he became concertmaster, leader, and conductor of the La Scala opera orchestra, and was founding professor of violin and viola at the Milan Conservatory’s opening in 1808. Under his direction at La Scala, the premieres of operas by Donizetti, Bellini, and Rossini were given, among others, as well as the Italian premieres of many operas by Mozart. Rolla also was one Italy’s first champions of the music of Beethoven, giving the Italian premieres of many of Beethoven’s symphonies as well as fostering the private performances of Beethoven’s quartets in his own home. Rolla was a prolific composer, whose music continues in the Italian tradition but with a heavy influence by the masters of the Viennese school, and Mozart in particular. His over 500 mostly instrumental compositions include dozens of concertante works for violin or viola and orchestra, and hundreds of chamber works, including over 100 duos for two violins and over 70 for violin and viola. Rolla was also responsible for writing some of the earliest pedagogical works for the viola, which he likely used in his teaching at the conservatory. Much of Rolla’s music went unpublished during his lifetime, though most of the music he did publish was chamber music, sent to the chamber music centers of Paris and Vienna to delight its citizens, such as his enchanting Op. 1 Trios Concertants. The six trios in this collection exhibit Rolla’s total mastery in composing virtuosically yet idiomatically for all three instruments, in a style that uses singing operatic melodies while displaying the influence of Mozart in its inventiveness.

In 1792 a young Beethoven moved to Vienna, and immediately took the city by storm. After he completed his brief studies with mentor Joseph Haydn, Beethoven quickly found success as both a virtuoso pianist and composer among Vienna’s artistic and aristocratic circles. His early works firmly display his mastery of Haydn and Mozart’s Viennese classical style, infused with Beethoven’s own humor and brilliant touch, while already hinting at the expansive breadth and deeply felt sentiment of his later music. One of Beethoven’s biggest early successes in Vienna was the publication and performance of his three Op. 9 String Trios. Composed from 1797-98, Beethoven considered the trios his best compositions up to that point. Shortly after these trios were completed, Beethoven turned to writing quartets, the chief domain of his mentor Haydn, and never returned to writing trios. His Op. 9 trios are written in the trio concertant style, featuring equal responsibility and virtuosic writing among the three instruments. The G major trio especially feels like Beethoven is pushing up against his boundaries for the genre, adding many double stops to help fill out the harmonies and give the sound a depth that is more symphonic than chamber in scope. Of particular note is the second movement Adagio in E major, which shows the influence of Haydn in its melancholic beauty. 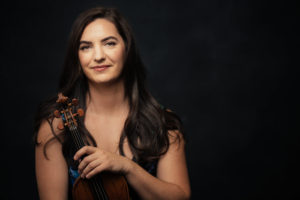 Tekla Cunningham, baroque violin, viola and viola d’amore, leads an active and varied musical life. At home in Seattle, she is Orchestra Director and concertmaster of Pacific MusicWorks, and is an artist-in-residence at the University of Washington. She founded and directs the Whidbey Island Music Festival, now entering its twelfth season, producing and presenting vibrant period-instrument performances of music from the 17th-19th centuries, and plays regularly as concertmaster and principal player with the American Bach Soloists in California. Her concert performances have earned glowing praise from reviewers and have been described as “ravishingly beautiful” and “stellar”. She has appeared as concertmaster/leader or soloist with the American Bach Soloists, Baroque Chamber Orchestra of Colorado, Seattle Baroque Orchestra, Musica Angelica, and Pacific Baroque Orchestra and has played with Apollo’s Fire, Los Angeles Opera, Philharmonia Baroque Orchestra, and at the Berkeley, Carmel Bach, San Luis Obispo Mozart Festival, Indianapolis, Oregon Bach, Vancouver Bach, Savannah, Bloomington Festivals and Valley of the Moon festivals. Tekla received her musical training at Johns Hopkins University and Peabody Conservatory, Hochschule für Musik und Darstellende Kunst in Vienna, Austria, and at the San Francisco Conservatory of Music. Tekla plays on a violin made by Sanctus Seraphin in Venice, 1746.

Violist Vijay Chalasani is a Seattle-based performer, scholar, and teaching-artist whose work focuses on the performance practice of music of the last five centuries. Equally at home on both modern and historical violas, Chalasani was featured as a soloist in performances ranging from the Walton Viola Concerto, Bruch Romanze, Mozart Sinfonia Concertante, and Hoffmeister Viola Concerto with modern orchestras, to Bach’s 6th Brandenburg concerto, the Telemann Viola Concerto, and the Telemann Concerto for Two Violettas with period orchestras. An avid advocate for contemporary music, Chalasani was the soloist in the US premiere of Vinko Globokar’s chamber-theater piece “Blinde Zeit” with members of the Callithumpian Consort, supervised by the composer. He has also performed with violist-composer Garth Knox, pianist-conductor Stephen Drury, and the Inverted Space Ensemble, coached with composer Brian Ferneyhough (on his “Adagissimo” for string quartet), and has collaborated with the Guerrilla Composers Guild and others to actively commission new works for the viola. Chalasani performs frequently on period instruments with ensembles such as the American Bach Soloists, Pacific MusicWorks, Early Music Vancouver, and the Albany Consort, as well as in chamber music performances of works from the classical and romantic eras on historical instruments. Chalasani is Predoctoral candidate in the Doctor of Musical Arts program at the University of Washington, where he studied viola with Melia Watras; as a Teaching Assistant at the UW, he worked with the Modern Music Ensemble and Baroque Ensemble, and taught Chamber Music Lab and String Techniques. Chalasani’s graduate studies were at the San Francisco Conservatory of Music, where he studied with Don Ehrlich (modern viola), Elizabeth Blumenstock (baroque viola), and the late Mark Sokol (chamber music). His undergraduate studies were at CSU Sacramento, where he studied viola with Anna Kruger, chamber music with Ian Swensen and Andrew Luchansky, and pedagogy with Judy Bossuat. In addition to the concert stage, Chalasani often performs in less traditional venues such as bars, cafes, and house concerts, and has appeared in cross-genre performances with a wide range of artists including rock band Third Eye Blind, hip-hop orchestra Jazz Mafia, and indie-folk group Americana Orchestra. 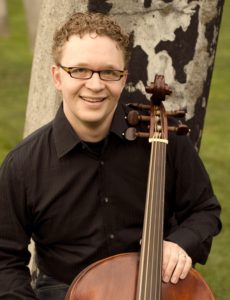 Nathan Whittaker, violoncello, enjoys a unique and diverse career as a concert soloist, chamber musician, recitalist, teacher, and historical cello specialist with concert stops ranging from Seattle to New York to Dubai. He is the Artistic Director of Gallery Concerts (Seattle) and regularly plays with the Seattle Baroque Orchestra, Pacific Baroque Orchestra, Portland Baroque Orchestra, and has served on the faculty of Cornish College of the Arts. He can be heard on recordings by ATMA Musique and Harmonia and broadcasts by NPR, CBC, and KING FM. He completed a Doctorate of Musical Arts from the University of Washington in 2012 and also holds degrees from Indiana University.