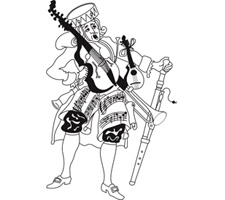 Jonathan writes – When Laura came back from Juilliard and proposed that we perform an orchestrated version of the Goldbergs, I was of course shocked. But I got over it – I am fearless dabbler. After studying Sitkovetsky’s brilliant orchestration, a successions of “what if” ideas kept coming to me. I was impressed that Sitkovetsky retained every note that Bach wrote, and almost always in the same octave as the original, and that inspired me to do the same. But I wanted to go further in the distribution of the melodies among the musicians, creating wonderful problems for the players, but making the work visually spectacular. And why not? Bach’s original, for one harpsichordist, is a visual tour-de-force of the hands, and it seemed that our group could provide a similarly amazing visual spectacle. Peninsula and San Francisco audience have already heard this and been impressed. This is your chance to hear it in Berkeley.

Was the work written, as reported by Bach’s first biographer Forkel, for the young Goldberg to play to the old Count Kaiserling when he couldn’t sleep? A nice story, but almost certainly not true. But in any case, you will not sleep through our rendering.

Join us after the concert for lunch, a chance to chat, and to take a look at the score.