Sweet Melancholy—Lacrimae, Lamentations, and other Sad Pavans by John Dowland 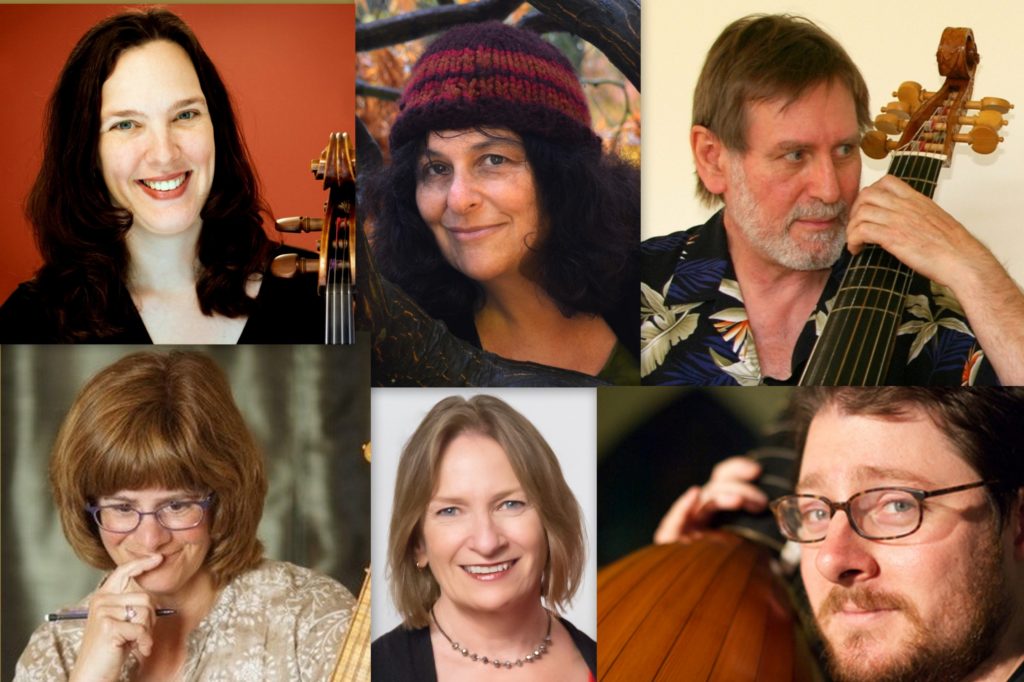 The third of Barefoot’s three contributions to this year’s Berkeley Festival Fringe will be a program based around John Dowland’s famous “Lacrimae or Seaven Teares figured in Seaven Passionate Pavans.” The pavans are all reconfigurations of the most well-known of all Elizabethan pavans which Dowland set to words as “Flow, my Tears.”   We have chosen to supplement the seven pavans with two more pavans, “Sir Henry Umpton’s Funeral” and the astonishing “Semper Dowland, semper dolens” and have added some of Dowland’s settings from the “Lamentations for Sir Henry Noel his Funeral Psalms (1597).”

This is a program purely inspired by the Elizabethan love of extravagant melancholy. The Barefoot All-Stars are all well-known to Bay Area audiences, and are very pleased to be joined by John Lenti, lute, for this most solemn and gorgeous program in the perfect acoustic of St. Mark’s Parish Hall. 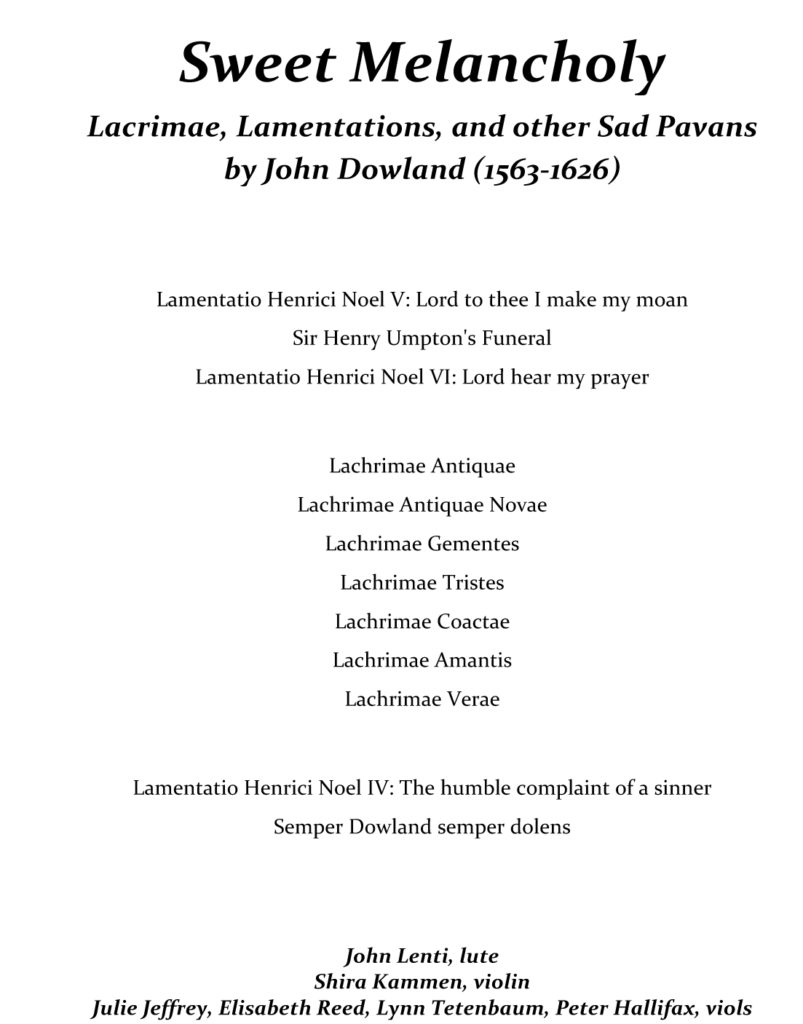 JULIE JEFFREY has been playing the viol since 1976. She has performed throughout the U.S., in Canada, Mexico, Europe and Australia, and teaches privately and at workshops in the U.S. and abroad. Ms. Jeffrey is a member of Sex Chordae Consort of Viols, founder and creative mastermind of Wildcat Viols, and embodies half of the viol duo Hallifax & Jeffrey. She is co-founder and co-director of Barefoot Chamber Concerts, has served on the Viola da Gamba Society of America board of directors, and is a co-founder and active member of the Viola da Gamba Society, Pacifica Chapter.

SHIRA KAMMEN Multi-instrumentalist and occasional vocalist Shira Kammen has spent well over half her life exploring the worlds of early and traditional music. A member for many years of the early music Ensembles Alcatraz and Project Ars Nova, and Medieval Strings, she has also worked with Sequentia, Hesperion XX, the Boston Camerata, the Balkan group Kitka, the King’s Noyse, the Newberry and Folger Consorts, the Oregon, California and San Francisco Shakespeare Festivals, and is the founder of Class V Music, an ensemble dedicated to providing music on river rafting trips. She has performed and taught in the United States, Canada, Mexico, Europe, Israel, Morocco, Latvia, Russia and Japan, and on the Colorado, Rogue, Green, Grande Ronde, East Carson and Klamath Rivers.

JOHN LENTI John Lenti’s performances as a soloist and chamber musician on theorbo, renaissance lute, baroque lute, archlute, and baroque guitar have been described as “a joy to behold” (Seattle Times) and praised for their “nuanced beauty and character” (Gramophone). He regularly deploys his “unusually big sound” (Third Coast Digest) in all of the various early music series, in opera pits, churches, libraries, theaters, and living rooms all over the place, the Boston, Berkeley, Indianapolis, and Salish Sea Early Music Festivals, and with, among others over the years, American Bach Soloists, Bach Collegium San Diego, Carmel Bach Festival, Catacoustic Consort, Farallon Recorder Quartet, Haymarket Opera, The I-90 Collective, Magnificat, Magnolia Baroque Festival, Mercury Baroque, La Monica, the Los Angeles Philharmonic, Musica Pacifica, Newberry Consort, New World Symphony, Opera Omnia, Portland Opera, Pittsburgh Opera, Seattle Opera, and Seraphic Fire. He enjoys nothing so much as making music on tour with the I-90 Collective, Ostraka, Sacro Profano, and Wayward Sisters. His recording credits include “Division” with Ostraka, “And I remain: three love stories,” with soprano Linda Tsatsanis, chamber music of Matthew Locke with Wayward Sisters, and work as a sideman with La Monica, Seattle Baroque, and Portland Baroque Orchestra. He is a graduate of the North Carolina School of the Arts and Indiana University, and he studied lute with Nigel North, Jacob Heringman, and Elizabeth Kenny.

ELIZABETH REED  teaches Baroque cello and viola da gamba at the San Francisco Conservatory of Music, where she is co-director of the Baroque Orchestra.  Her playing has been described in the press as, “intense, graceful, suffused with heat and vigor” and “Elisabeth Reed provided the authentic Baroque sound, with her delicately nuanced and powerful playing of the Baroque cello and viola da gamba.”  A member of the American Bach Soloists, Voices of Music, and Wildcat Viols, she has also appeared with the Seattle, Portland, and Philharmonia Baroque Orchestras, and at the Boston Early Music Festival, the Berkeley Early Music Festival, the Ohai Festival, the Whidbey Island Music Festival, and the San Luis Obispo Mozart Festival.  A graduate of the North Carolina School of the Arts, the Oberlin Conservatory, the Eastman School of Music, and Indiana University’s Early Music Institute, she can be heard on the Virgin Classics, Focus, and Magnatune recording labels.  She also teaches baroque cello and viola da gamba at the University of California at Berkeley.  Highlights of this current season include performances of Haydn trios with Ian Swensen and Ken Slowik at the Smithsonian Institution in Washington D.C.; 17th century German chamber music with Monica Huggett in Portland, OR; French Baroque chamber with Byron Schenkman and Ingrid Matthews and the St. John Passion with Steven Stubbs and Pacific Musicworks in Seattle, WA.  She is a Guild-certified practitioner of the Feldenkrais Method of Awareness Through Movement, with a focus on working with musicians and performers.

LYNN TETETENBAUM Lynn Tetenbaum has been hailed by the Boston Herald as a “master musician, fluent, intelligent and natural.” She holds a B.A. from Wellesley College and the Artist Diploma from Oberlin Conservatory where she studied with Catharina Meints. The recipient of grants from Wellesley College and the Ministry of the Flemish Community, she spent five years in Belgium where she studied with Wieland Kuijken at the Royal Conservatory of Brussels, receiving the Premier Prix in 1987 and the Diplome Superieur in 1990. While living in the Boston area, she was a co-founder of “Defense de la viole”, a series dedicated to music featuring the viola da gamba, and performed for many years with Musica Poetica, an ensemble focusing on music from 17th-century Germany.

Since moving to the Bay Area in 1988, Ms. Tetenbaum has performed with many of the area’s leading early music ensembles including American Baroque, the California Bach Society, Magnificat, and the San Francisco Bach Choir. She has toured and recorded with groups such as Jacobean Viols (Holland), the Boston Camerata and the Sex Chordae Consort of Viols, and has appeared at the Berkeley Early Music Festival, the Regensberg Festival and on numerous San Francisco Early Music Society concerts. Ms. Tetenbaum received praise in the L.A. Times for her “beautiful” playing of the solo gamba arias in J.S. Bach St. Matthew Passion, which she performed with the L.A. Philharmonic. Earlier this year, she appeared with Mr. Kuijken on the SFEMS series in a set of concerts featuring the virtuoso duo repertoire. She has taught at workshops in Belgium and England as well as in the U.S., and teaches privately in the Bay area. She has recorded for Erato, Koch, and Centaur.