By Heidi Waterman on May 3, 2022 in BFX Main-Stage, Uncategorized 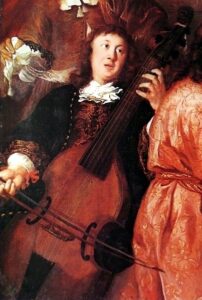 Buxtehude playing a viol, as portrayed by Johannes Voorhout

Dieterich Buxtehude needs no introduction to early music lovers: his compositions are included regularly on concert programs, he is still a mainstay in college composition classes, and he is rightly lauded for his contributions to early music; one of the great organists and composers of the North German tradition, he directly influenced a young J. S. Bach, who famously walked 250 miles to meet the master of Lübeck!

While best known for his organ compositions, he also produced a substantial amount of vocal music, including wedding arias, canons, and a significant body of music for the church. His Membra Jesu Nostri comprises seven cantatas, each one divided into six sections utilizing both instrumental and vocal forces (SSATB). Each cantata is a meditation on the wounds of the crucified Christ (feet, knees, hands, sides, breast, heart, and face).

The main text of the cantatas are taken from the poem—more accurately, a cycle of seven poems—entitled Salve Mundi Salutare (sometimes called the Rhythmica oratio), often credited to either Arnulf of Leuven (1200-1250) or Bernard of Clairvaux (1090-1153), while the texts for the concertos are taken from the Old Testament.  Composed in 1680, when Buxtehude would have been approximately 43, it’s the first known Lutheran oratorio. 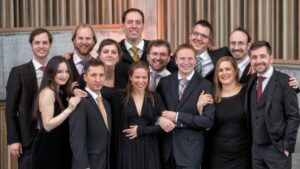