Tickets available at the door. Prices: $15 General Admission; $12 for SFEMS and EMA members.

One of the most prolific female composers of the 17th century, the Italian nun Isabella Leonarda (1620-1704) published over 250 sacred works as well as the first collection of instrumental music by a female composer. Acclaimed Boston-based countertenor Reginald Mobley and Agave Baroque present an illuminating program of works for voice, strings, and continuo in honor of the Blessed Virgin Mary, including two modern-day premieres. Hailed by Early Music America for its “rapturous music and impressive playing,” the Bay Area’s Agave Baroque was a finalist in the 2012 EMA Baroque Performance Competition. This program debuts Agave’s new expanded lineup. 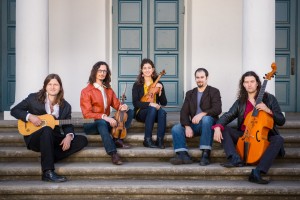 Agave Baroque is a dynamic Bay Area ensemble specializing in string chamber music of the seventeenth century. Agave has received numerous awards and accolades, and gained local and national attention for their vibrant performances and growing discography. Now in its sixth season, Agave debuts a new and expanded lineup and continues to be a unique and innovative voice in the early music community.

Agave received its first taste of national exposure less than a year after its inception, when the ensemble was selected by Early Music America to perform in a showcase concert at the APAP Convention in New York. In 2009, The Museum of Jurassic Technology in Los Angeles commissioned Agave to design a program of music by Henry Purcell and his contemporaries especially for performance in the Museum’s Tula Tea Room. Agave premiered Cold Genius at the MJT in 2010, and subsequently recorded it. In 2011, Early Music America selected Agave Baroque as one of five finalists in the NAXOS/EMA Recording Competition. In 2012, the San Francisco Early Music Society chose Agave to present a main stage concert on the 2012 Berkeley Early Music Festival, about which Early Music America magazine said, “Rapturous music and impressive playing…[Agave Baroque] kept the audience entranced.” Later in 2012, EMA selected Agave to compete in New York as one of six finalists at their Baroque Performance Competition. Agave received a generous grant from the San Francisco Friends of Chamber Music to record Friends of Ferdinand, which VGo Recordings released in 2013. This summer, Agave will record Queen of Heaven: Music of Isabella Leonarda with countertenor Reginald L. Mobley, also on the VGo Recordings label.

Violinist Natalie Carducci performs throughout the United States, appearing in venues ranging from Avery Fisher Hall in New York City to intimate cafes in the San Francisco Bay Area, where she is currently based. A versatile chamber and orchestral musician with a special interest in early music, she has recently performed with Bach Collegium San Diego, Pacific Bach Project, El Mundo, The Albany Consort, the San Francisco Bach Choir, One Found Sound, Karl Cronin and the Americana Orchestra, Magik*Magik Orchestra, and is a founding member of MUSA and the Alchemy Trio. In 2012, she won the Voices of Music Bach Competition, giving her the opportunity to perform in their concert series. This season she will also appear on the concert series Noe Valley Chamber Music, Benvenue House Music, and Santa Cruz Chamber Players.

Natalie has collaborated with renowned artists Steven Dann, Kenneth Slowik, James Boyd, and members of the Columbus Symphony Orchestra and has appeared in music festivals around the world, including the St. Lawrence String Quartet Seminar, Tafelmusik Baroque Summer Institute, the International Music Academy Pilsen in the Czech Republic, Le Domaine Forget in Quebec, the American Bach Soloists Academy, Vancouver Baroque Instrumental Programme, and the Britten-Pears Baroque Orchestra in Aldeburgh, England. Natalie has performed under the baton of Christophe Rousset and Christian Curnyn, and in master classes for Jeanne Lamon, Amandine Beyer, and Rachel Podger, among others.

Passionate about the impact music can have in the lives of children, Natalie teaches at the non-profit Northern California Music and Art Culture Center and has coached inner-city school children through the Chamber Music Connection program in her native city of Columbus, Ohio. Natalie received her Master of Music degree at the San Francisco Conservatory of Music, her Bachelor of Music degree from SUNY Purchase College Conservatory of Music, and her SAA Suzuki Teacher Training at the Hartt Suzuki Institute in Hartford, Connecticut. Her main teachers have included Michael Davis, Laurie Smukler, Calvin Wiersma, Ian Swensen, and Elizabeth Blumenstock. A certified Pilates instructor, Natalie promotes body-mind awareness for sustained physical well-being and enjoys sharing her knowledge with the music community at large.

William Skeen plays principal cello in Philharmonia Baroque Orchestra, American Bach Soloists, Portland Baroque Orchestra, Musica Angelica, Pacific Music Works in Seattle, Pacific Baroque Orchestra in Vancouver, and the Bach Collegium of San Diego. In addition to performing with almost every baroque orchestra on the west coast, he is Associate Principal cellist and Viola da Gamba soloist with the Carmel Bach Festival. Mr. Skeen is a sought-after chamber musician. He co-founded the New Esterhazy Quartet, La Monica, and is a member of the 54th Annual Grammy-nominated ensemble, El Mundo. He has performed with the National Symphony of Mexico, the LA Philharmonic, and the Dallas Symphony, and often tours the Americas with Musica Angelica, the Wiener Akademie of Vienna, and actor John Malkovich.

Mr. Skeen is Adjunct Professor of Baroque Cello and Viola da Gamba at The University of Southern California, founder and co-director of the SFEMS Classical Workshop, and is on the faculty of the American Bach Soloists ACADEMY, and the SFEMS Baroque Workshop. William holds a Bachelor of Music degree from the Cleveland Institute of Music, working with Alan Harris, and a Master of Music degree from U.S.C., studying with Ronald Leonard.

Kevin Cooper is a classical and baroque guitarist from central California with an affinity for the extremes of modern and early music. He performs regularly as a soloist and with Agave Baroque and Ensemble Mirable. He also appears with Les Surprises Baroque, Live Oak Baroque Orchestra, Accademia d’Amore Baroque Opera Workshop, Long Beach Camerata Singers, and the Corona del Mar Baroque Festival Chamber Orchestra. Kevin’s publications range from guitar quartet arrangements of Carlo Farina’s Cappricio Stravagante to a collection of folk and children’s songs entitled Snakes, Snails, and C Major Scales. His recordings include projects with Agave Baroque and Ensemble Mirable as well as Night of Four Moons a CD of modern music for voice and guitar with mezzo-soprano Catherine Cooper on the Doberman-Yppan label. In 2006, he was honored as the Outstanding Doctoral Graduate in music from the University of Southern California, where he studied with William Kanengiser and James Tyler. Currently he leads the guitar program at Fresno City College.

Hailed by The Miami Herald for his “superb continuo… brilliantly improvised and ornamented,” Henry Lebedinsky performs on historical keyboards across the United States and the United Kingdom. He currently performs with the St. Paul Chamber Orchestra, The Vivaldi Project, Agave Baroque, The Live Oak Baroque Orchestra, the Seicento String Band, and LUTEFISK. He has also performed with The Charlotte Symphony, The Minnesota Bach Ensemble, Seraphic Fire and the Firebird Chamber Orchestra, Boston Revels, and the Harvard Baroque Orchestra, among others. He is the founder of the Music @ St. Alban’s concert series in Davidson, North Carolina, and served as interim Artistic Director of Charlotte Chamber Music, Inc. and Director of Rochester, NY’s The Publick Musick. In addition to performing, Mr. Lebedinsky has taught masterclasses and workshops on historical keyboards and performance practice at the University of Edinburgh, Bowdoin College, Davidson College, The University of North Carolina at Greensboro, and Appalachian State University, and will be a featured presenter at the American Guild of Organists’ 2014 National Convention.

An avid composer of music for choir and organ, his sacred music is published by Carus-Verlag Stuttgart. His editions of vocal works of 17th century nun composers for Saltarello Editions have been performed around the world, most recently in France, South Korea, and Lebanon. Lebedinsky holds degrees from Bowdoin College and the Longy School of Music, where he earned a Master of Music in historical organ performance as a student of Peter Sykes. When not at a keyboard instrument, he plays guitar and bouzouki with the Celtic traditional music bands Earl’s Chair and The Beggar Boys, who were recently featured in National Public Radio’s syndicated holiday special A Celtic Christmas from Biltmore Estate with Kathy Mattea. He lives in Seattle, where he serves as Music Director at Edmonds United Methodist Church.