All Over the Map

Tickets available at the door. Price: $10.

Our program is “All Over the Map”, literally and figuratively. There are pieces from the 14th to the 18th century, from North and South America, and Europe. There are composers from the USA, Peru, Ireland, Scotland, England, Italy, Spain, France, and Germany. And, we jump from continent to continent, from century to century, at times, even, from instrument to instrument. We will, however, not jump off the stage. We think. 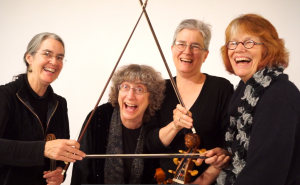 The Alphabet Baroque Club is an outgrowth of the highly successful A to Zed concert series. The ABC is composed of dedicated and serious musicians who believe that beautiful, moving and profound music can be rehearsed while laughing hard and eating well. The same holds true for silly, light hearted, and just plain fun music.

I am a square black Scion. Very cute. My job is to take Phebe Craig and her harpsichords everywhere. Everywhere! We go to UC Davis to teach, perform and inspire youth. We run around to every Baroque group you can name….and some you can’t!  I hear about them as we eat together. She gives me gas and oil while she munches Chinese take-out. Up and down the 101. She told me about her CD company Katastrophe. They produced  DiscContinuo;  the add-a-player recordings she concocted with Katherine Westine. And about their duo recording called Beside Themselves; everything from Bach and Couperin to Gershwin and Joplin! Of course she would be in a group called La Foolia. We chuckle a lot as we tear up the road together.

I’m an old Honda. Maria Caswell needs me and feeds me (Like her goats, I guess!). We have long drives from her country house in Sebastopol. She talks to me and sings to me. She seems to like old music—really, really old music—and lately has been tossing a vielle in the car along with her violin and viola. Though I don’t think she plays that at Philharmonia Baroque Orchestra (a founding member, she is!), or ABS, or Live Oak Baroque. She may play it with the Alphabet Baroque Club though. They must be a fun group.

I am a 1999 Camry and I am proud of how reliably I get Gwyneth Davis to all her jobs. One day it will be to SF for Lamplighters or Donald Pippin operas, the next to jobs and concerts with the Eloquence Quartet. And between all that we get up at dawn so she can make ice cream for the Glen Ellen Star!  She had a vacation once, but it was long ago…I missed her.  She is usually packing her cello and/or viola da gamba in the trunk and away we go. I think the the Alphabet Baroque Club meetings are her favorites.

I’m a dusty old pick-up truck. No glamour at all. But I can hold up to 4 cellos or gambe (She plays treble viol too), and other music paraphernalia. Or hay for the sheep. I’ve taken Yaba down to the SF Opera Orchestra, SF Symphony, over to Sonoma State to teach and conduct the String Orchestra (you should see her conducting and singing and driving all at once. Ha!)  She also (with much help from partner Gwyneth Davis, she’s in the Camry) organized 2 years worth of Alphabet Concerts:  23 concerts playing music by composers whose last names start with every letter. Oy!  That morphed into Alphabet Players Through the Centuries, and now is happily the Alphabet Baroque Club. We’re going down to the Berkeley Fringe Festival soon. See you there!