From Dall’Abaco to Zappa: The violin/cello duo in the 17th and 18th centuries

This program explores the development of the violin and cello duo in the 17th and 18th centuries. In 17th-century Italy, the cello (or bass violin) had long been one of the options for the performance of many bass lines, especially for music based on dance forms, and in certain contexts the cello was the preferred (or only) choice of instrument indicated by the composer. In late 17th-century Northern Italy (especially Bologna), as a solo repertoire began to be written for the cello, we also see the development of a genre of duos for violin and cello–a genre that has been relatively neglected in modern times. Sometimes the compositions are simply violin pieces with a rather generic bass line that happens to be for the cello, but often they exhibit idiomatic figuration that shows an intimate knowledge of the instrument. In the course of the 18th century, these duos (especially those written by cellists) often reveal a truly equal partnership between the instruments. In this concert we will perform some of our favorites from this repertoire, including works of Jacchini, Dall’Abaco, Tessarini, Zappa, and more! 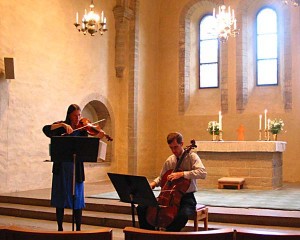 Boel Gidholm and Christopher Haritatos have performed together since they met in 1992 as students at the Akademie für Alte Musik Bremen. Within the past year they have performed at the Victoria Bach Festival in Victoria, Texas; in Sweden at Vreta Kloster, at Bjärka-Säby castle, and on the island of Gotland; in Cape Breton, Nova Scotia, and in various venues in Rochester, NY. They are Artistic Directors of Publick Musick, a Rochester-based period-instrument ensemble performing music from 1600-1800 and beyond.

Boel Gidholm lives in Rochester, NY, where she is Co-Artistic Director of the period-instrument ensemble Publick Musick. As a baroque violinist and violist, she has worked with early music ensembles such as Ensemble Aperto (Germany), Fiori Musicali-Barockorchester Bremen, the New York Collegium, ARTEK, Concert Royal (New York City), Pegasus Early Music (Rochester, NY), NYS Baroque (Ithaca, NY) and Ars Lyrica Houston. While living in Austin, Texas, she worked as a member of La Follia Austin Baroque and performed on both violin and vielle with Texas Early Music Project. Since 2004 she has performed with the Victoria Bach Festival, Victoria, Texas, on both the modern and baroque versions of her instrument, with repertoire ranging from Biber to Britten and beyond. Chamber music performances have taken her to Italy, France, Latvia, the Canary Islands, Canada and Denmark. She appears on recordings with Fiori Musicali-Barockorchester Bremen, Steintor Barock (Bremen, Germany), L’Arco (Hannover, Germany), Apollo’s Fire (Cleveland, Ohio), and Publick Musick (Rochester, NY). She studied violin at the University of Gothenburg in her home country of Sweden, and studied baroque violin and performance practice at the Akademie für Alte Musik in Bremen, Germany. 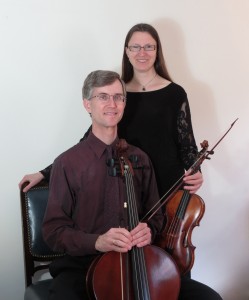 Christopher Haritatos has over 20 years of experience as a baroque cellist with period-instrument ensembles on three continents. He has collaborated in chamber music with artists such as Elizabeth Wallfisch, Marc Destrubé, Kristian Bezuidenhout, and Sergiu Luca, and has played in ensembles such as the Handel and Haydn Society (Boston), Apollo’s Fire (Cleveland), and Ars Lyrica (Houston). While living in Europe, he was the continuo cellist of Fiori Musicali-Barockorchester Bremen, with whom he took part in several recordings and tours, and worked with Andrew Lawrence-King’s ensemble “The Harp Consort.” Chris is now based in Rochester, NY, where he co-directs the period-instrument ensemble Publick Musick, plays with Pegasus Early Music, and is the cellist of the baroque chamber ensemble Fioritura. Equally accomplished as a modern cellist, Chris is a member of the Rochester Philharmonic Orchestra, has been on the faculty of Texas State University-San Marcos and has given workshops and master classes at several other colleges and universities. He holds degrees from the University of Chicago, the Cleveland Institute of Music, and the Eastman School of Music. His major teachers were Alan Harris, Catharina Meints, Steven Doane, Pieter Wispelwey, and Jaap ter Linden, with whom he studied as a Fulbright Scholar at the Akademie für Alte Musik Bremen.