Flowers from the Garden 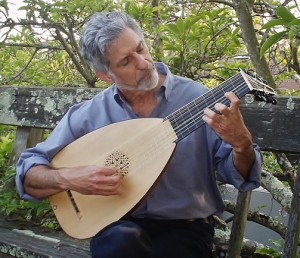 Dan will perform selections from his “Garden Music” recitals, which have taken place over the past year at the University Press Books & Musical Offering CD Shop venue. This special harvest will feature compositions by masters of the lute and vihuela repertoire, spanning the late 15th to early 17th centuries and ranging from the most famous masterworks by Francesco da Milano and John Dowland to gems by lesser known lutenist composers, such as Julian Belin, Jacobo Albutio and John Danyel.

Daniel Winheld is a San Francisco Bay area lutenist and teacher. He began his music studies on Classical Guitar in Philadelphia, studying under Professor Peter C. Colonna; and continuing with Alirio Diaz in the Master Class at the Accademia Musicale Chigiana in Siena, Italy. As the first Classical Guitar major at Temple University, he also broke new ground by adding lute music of the Renaissance and continuo playing to his studies. He became a specialist in both Renaissance and Baroque lute as well as bass Viola da Gamba. He has performed with numerous Early Music ensembles as well as presenting solo concerts over the years on the East and West coasts; including a critically acclaimed solo recital at Carnegie Recital Hall. He lives in Berkeley, CA, with his wife, soprano and keyboard artist Rachel Aaron Winheld, with whom he has performed lute songs and viol & harpsichord duets. He offers private instruction in Renaissance and Baroque lute. For the past year he has been presenting bi-weekly recitals at the University Bookstore & Musical Offering’s “Garden Music” Saturday afternoon performance series.