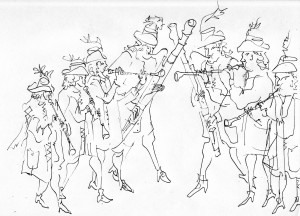 While most historical evidence about oboe bands in the Baroque era comes from Germany, such groups were common in other countries as well, and they served in the employ of military units, townships, and courts.  In his definitive The Eloquent Oboe, Bruce Haynes cites an early 18th-Century German chronicler’s observation of an oboe band’s duties: “Every morning the Hauboisten perform a little morning piece in front of the officers’ quarters, a march which is pleasing to them, a little Entrée and a few minuets, for which the commander has a special liking. This is also repeated in the evenings or whenever the commander has guests or parties.” Feldmusik is pleased to present a representative sampling of this repertoire by the likes of Johann Philipp Krieger, J.C.F. Fischer, and the always-popular Anonymous.