Tickets available in advance or at the door. Prices: $15-20. 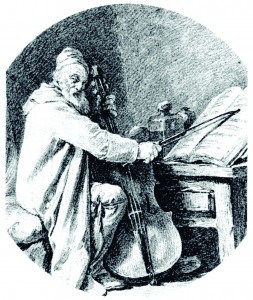 Cellist and musicologist John Lutterman has given solo performances in Vienna, Salzburg, Munich, Basel, Belfast, New York, Washington, Sacramento and San Francisco, including recitals of the complete cello works of Bach, Brahms and Chopin. Future engagements include concerts this month with the Grammy-nominated ensemble El Mundo in Austria, Germany and Italy, and a performance of Miaskovsky’s Cello Concerto with Anchorage Civic Orchestra next May 2015. A specialist in period-instrument performance, Dr. Lutterman has performed and recorded with prominent European and American ensembles, including Salzburger Hofmusik, Wiener Akademie, Aula Classica, El Mundo, Archangelli Strings, Magnificat, Philharmonia Baroque, and American Bach Soloists. Prior to joining the music faculty at University of Alaska at Anchorage, Dr. Lutterman served on the faculty of Whitman College, Lawrence University, the University of California at Davis, the University of the Pacific and the San Francisco Conservatory.

Dr. Lutterman holds the Doctor of Musical Arts degree in cello performance from Stony Brook University, where he studied cello with Bernard Greenhouse and Timothy Eddy. After completing his D.M.A., he spent four years working and doing research in Europe, studying Baroque cello and viola da gamba with Christophe Coin at the Scola Cantorum, Basel, and with Jaap ten Linden at the Royal Conservatory in The Hague. In 2006, Dr. Lutterman completed a second doctoral degree in historical musicology at the University of California, Davis, with a dissertation on the relationship between notation, compositional theory, and historical Improvisatory practices in Bach’s cello suites. He has given papers on his research at national and international professional conferences, including the American Musicological Society, and his articles have appeared in Early Music America, Speculum Musicae, Strings and the San Francisco Classical Voice.

Laura Koenig teaches flute and music history at University of Alaska at Anchorage and is the Artistic Director for the Anchorage Festival of Music. She received her D.M.A. from the University of Iowa and holds music degrees from UCLA (summa cum laude, Phi Beta Kappa) and UC San Diego. Since moving to Anchorage in 1997, Dr. Koenig has performed in the Anchorage Festival of Music, the CrossSound New Music Festival, as guest soloist with the Kenai Peninsula Orchestra and the UAA Wind Ensemble, and is principal flute of the Anchorage Opera Orchestra and Anchorage Concert Chorus Orchestra. She also directs the Northwind Flute Choir, coaches and coordinates chamber music for the Alaska Youth Orchestras, and is a founding member of Jomala, an ensemble devoted to new jazz compositions. Dr. Koenig was a guest soloist at the 2012 National Flute Association annual meeting and was a nominee for the 2013 UAA Chancellor’s Award for Excellence in Teaching.

Jonathan first took up harpsichord while a mathematics student at Oxford, England.  Prior to that he had been an active and occasionally prize-winning pianist though his youth.  After graduating, he intended to study harpsichord seriously with someone really famous, but ended up learning most of what he knows from careful listening and from working with terrific soloists.

Marion Rubinstein, recorder, received her training in performance and musicology at Stanford, where she studied with Margaret Fabrizio and George Houle, and also at King’s College, London.  She also performs frequently on organ and harpsichord.  She is a founder and co-director of the Albany Consort (now in its 40th season), and performs with the Santa Cruz Chamber Players, Soli Deo Gloria, Jubilate, Palo Alto Chamber Orchestra, Santa Clara Chorale and Whole Noyse.  She also greatly enjoys sharing her musical discoveries with her students.