From the Mountains to the Heavens: Music for Recorder Orchestra and Youth Recorder Ensemble

The Junior Recorder Society is an educational outreach program of Voices of Music, and is supported by the East Bay Recorder Society and SFEMS. Recorder players between the ages of 7 and 18 are welcome to join us at our monthly meetings. http://www.voicesofmusic.org/jrs.html

The Barbary Coast Recorder Orchestra, now in its fourth year, is an educational outreach program of Voices of Music. BCRO’s name references historic 19th century San Francisco, evoking a flavor of diversity and imparting its main objective: to perform unconventional high quality works for recorder orchestra, including new composition, as well as conventional medieval, renaissance and baroque arrangements, giving voice to the unique sounds of the recorder orchestra. It is a “democratic” orchestra in which all invited members participate equally from soprano to bass, and even contrabass, greatbass, subcontrabass and subgreatbass. http://www.voicesofmusic.org/BCRO.html 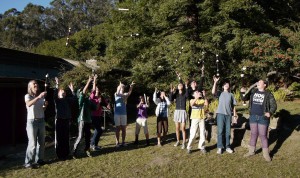 Louise Carslake is well known to Bay Area audiences as a performer on the baroque flute and the recorder. She is a member of Music’s Re-creation, the Farallon Recorder Quartet, Magnificat and the Jubilate Baroque Orchestra and has performed widely in her native Britain, as well as in New Zealand, Poland, Ireland, and the Netherlands. She has made over ten CD recordings.  Louise is co-founder of the Junior Recorder Society teaches an after-school recorder program for the Albany school district, and for schools in Oakland and Berkeley.  She also teaches early music performance on the faculty at Mills College, and coaches baroque flute at U.C. Berkeley.

Andrew Levy studied music at the University of California at Berkeley (with Hanneke van Proosdij) and the Royal Conservatory of the Hague (with Daniël Brüggen). He has performed in the US, the Netherlands, and Germany with ensembles including UC Berkeley’s Baroque Ensemble, Ensemble Mirabile, Voices of Music, the Royal Wind Music, and Philharmonia Baroque Orchestra. Andrew grew up in Berkeley and enjoyed being a member of the East Bay Junior Recorder Society between the ages of 12 and 17.

Hanneke van Proosdij, co-directs the Junior Recorder Society, performs regularly as a soloist and continuo specialist, and is principal keyboard player with Philharmonia Baroque Orchestra, Festspiel Orchester Goettingen and Voices of Music, She has appeared regularly with Concerto Palatino, Hesperion XX,  Magnificat, American Bach Soloists. Concerto Koln, Chanticleer, LA Phil, Dallas Symphony, Gewandhaus Orchester and Arcadian Academy. She received her solo and teaching diplomas from the Royal Conservatory in The Hague where she studied recorder, harpsichord and composition. Together with her husband David Tayler, she co-founded and directs Voices of Music. Hanneke teaches recorder at UC Berkeley, and has been guest professor at Stanford, Oberlin, IN University Jacobs School of Music, University of WI and University of VT.

Frances Feldon, recorder and baroque flute, lives and teaches in Berkeley. She has performed with American Bach Soloists, California Bach Society, Sonoma Bach, and Ensemble Mirabile, is music director of the baroque/contemporary chamber ensemble Flauti Diversi, and a principal conductor for BCRO. Dr Feldon conducts the recorder program at Albany Adult School, is a regular faculty member at recorder workshops nationwide, and has conducted at recorder orchestra festivals in Montreal and Holland. She directed the SFEMS Recorder Workshop for twenty years.  She received a doctorate in collegium directing at Indiana University’s Early Music Institute, and has taught at IN University, UC Davis, and The Greenwood School. Her recording of the complete Boismortier Op. 37 sonatas is forthcoming.

Greta Haug-Hryciw, co-director of BCRO, had her initial recorder experience with the San Francisco branch of the New York Recorder Workshop in the early ’70s. Among her teachers are Hanneke van Proosdij (recorder), Peter Maund (percussion) and Stephen Kent (didjeridoo). Greta founded SDQ recorder ensemble, teaches private and group lessons, is a frequent teacher and director’s assistant at summer workshops and guest conductor at American Recorder Society chapters. She co-directed the American Recorder Orchestra of the West (AROW) with Richard Geisler from 2005-2010. Greta lives with her husband Lloyd on the San Mateo coast.

Joyce Johnson-Hamilton, trumpet, cornetto and recorder, recently retired from 31 years as music director of the Diablo Symphony Orchestra. Johnson-Hamilton has performed on cornetto and natural trumpet with The Whole Noyse, Albion Consort, Ave, Bach Collegium, Carmel Bach Festival, Northwest Chorale, Sackbut and Cornett Ensemble (Washington DC), Los Angeles Baroque Orchestra, and Women’s Antique Vocal Ensemble. She has been a guest conductor and served as principal trumpet of the Seoul Philharmonic, Oregon, Oakland and San Jose Symphonies and Cabrillo Festival Orchestra. She is a past conductor of the Napa Valley Symphony, San Jose State University Symphony and the San Jose Ballet. Ms. Johnson-Hamilton is a lecturer in trumpet at Stanford University.

Glen Shannon is a composer and recorder player living in El Cerrito. His love of straightforward, approachable music for the recorder has garnered several prizes in composition contests since 1997, most recently in 2013 with the Washington (DC) Recorder Society. In 2011 he was selected by the ARS to compose the piece to be played worldwide in celebration of its “Play the Recorder Month”. He publishes his music under his own name at www.glenshannonmusic.com, and his works have also been published by Moeck Verlag, PRB Productions, and the ARS. His works have also appeared in Recorder (UK) magazine and Blokfluitist (Belgium and The Netherlands) magazine. Glen is active in the ARS as editor of its Members’ Library Editions, a series introducing new recorder music to a worldwide membership.