Tickets available in advance or at the door. Prices: $10-15.

Making their Berkeley Festival debut, the fresh faces of the Laudami Ensemble present an exciting program of French and Italian music.

Long before the nationalist movements of the 19th century, the schism between the musical styles of France and Italy ran deep. The early 1700s found them further divided than ever; led by the followers and students of Lully in France and Corelli in Italy, the differences between the French and Italian styles seemed all but irreconcilable. To the French, the music of Italy was excessive and unrefined, containing a crazed passion that bordered on hysteria. To the Italians, the music of France was too fussy and mannered, lacking excitement and drive. However, this seemingly insurmountable divide was bridged beginning with the work of Francois Couperin in his set of pieces called “Les goûts réunis” – “The styles reunited,” which cleverly blended elements of both French and Italian style together with a beautiful result. By presenting French, Italian, and hybrid style works together, this program highlights both the dramatic differences and surprising similarities of the styles and demonstrates a small part of the wonderful diversity of chamber works from the period. 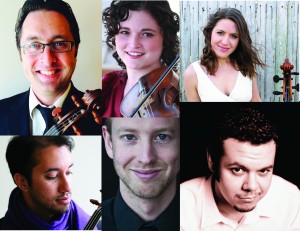 Violist Vijay Chalasani is a versatile and passionate performer with great stage presence, recently commended for being “a stud on stage.” Chalasani performs frequently on baroque viola with ensembles such as The Albany Consort, American Bach Soloists, Camerata Capistrano, and the San Francisco Conservatory Baroque Ensemble. Equally at home on both historical and modern violas, Chalasani was featured as a soloist in performances ranging from the Mozart Sinfonia Concertante, the viola concerti of Hoffmeister and Telemann, and Bach’s 6th Brandenburg concerto. As a chamber musician, Chalasani has performed on the San Francisco Conservatory’s Chamber Music Masters Series, Silicon Valley Music Festival, New Millennium Series, Festival of New American Music, and Live at Mission Blue.

Chalasani counts amongst his early musical influences studies in bluegrass, jazz, and Indian classical music, which along with his mixed Indian/European heritage contributes to a broad and diverse range of musical interests and perspectives. A champion of new music and modern composers, he has commissioned and premiered several works by local California composers. Chalasani is an alumnus of the American Bach Soloists Academy, and has worked in masterclasses with many of today’s most celebrated early music performers, including Manfredo Kramer, Phoebe Carrai, Wieland Kuijken, and Robert Mealy. Chalasani will complete his graduate studies at the San Francisco Conservatory in May 2014, where he studied modern viola with retired San Francisco Symphony Associate Principal Violist Don Ehrlich, baroque viola with Bay Area favorite Elizabeth Blumenstock, and chamber music with Mark Sokol. His undergraduate studies were at CSU Sacramento, where he studied viola with Anna Kruger, and chamber music with Ian Swensen and Andrew Luchansky. A native of Northern California, Chalasani was born in the Central Valley, grew up in the East Bay, and now resides in San Francisco. When not performing, Chalasani enjoys reading, tennis, hiking, and sampling from among the many offerings of San Francisco’s fine coffee and craft beer/cocktail scenes.

Emily Davidson, Baroque cellist and teaching artist, spends most of her time playing bass lines. Originally from New York, Emily currently lives, performs, and teaches in the Boston area. Emily received her Master’s degree from The Longy School of Music of Bard College as a student of Phoebe Carrai. She earned her Bachelor’s degree from The Hartt School at The University of Hartford, where she was a leading member of the school’s Collegium Musicum directed by Emlyn Ngai. She released her debut solo CD, BASS SOUNDS: Music for Unaccompanied Cello from the Early Baroque, in February 2013, and is releasing a follow-up album in the summer of 2014.

Early in her undergraduate career, Emily found that “early” music—classical music written roughly before 1750—was what resonated with her. She devoted herself to the study and practice of this repertoire by attending festivals and academies nationwide. Emily is a founding member and artistic director of Emergence Quartet, a period instrument string quartet, and has appears with numerous chamber ensembles in the Boston area. In June 2014 she’ll be releasing an electronic album, OldStyle, which takes baroque pieces remixes them into dance music. Stay in touch at emilyplayscello.com.

During the year Tyler is an evaluator for the Music Teachers Association of California’s merit program and operates a private violin studio located in Santa Rosa, California. With his spare time he enjoys nights under the stars with a telescope, cooking, his family, lapidary and racing motorcycles.

Harpsichordist Michael Peterson has performed nationally and internationally as a soloist and chamber musician.  He enjoys bringing the music to life in ways that stretch beyond the traditional concert experience; examples include living history programs, lecture recitals, and contributions to continuing studies courses.  Michael graduated with honors in harpsichord performance from Stanford University, where his teacher was Elaine Thornburgh.  He is now pursuing a diploma at the Royal Conservatory of The Hague, where he studies harpsichord with Jacques Ogg and basso continuo with Patrick Ayrton.

Laura Rubinstein-Salzedo is a Master’s Degree candidate in Historical Performance at The Juilliard School.  She also holds a Bachelor of Music degree in Violin Performance from California State University, Sacramento. Since 2010 Laura has been the Executive Director and violinist with the Albany Consort, an early music group based in the San Francisco Bay Area. She has played with Clarion Musical Society, New Vintage Baroque and New York Baroque Inc.  Laura equally loves to play baroque and modern violin, and hopes to cultivate a career involving orchestral playing and teaching on both instruments. When not playing the violin, she enjoys photography, knitting, baking, and playing with her cat Sherbert. www.salzedo.com/laura

Bass-baritone José Torres-Cooban makes his debut performance in the San Francisco Bay Area with Laudami. Prior to his arrival in California, Mr. Torres-Cooban frequently performed in concert with Boston Baroque and many other companies throughout the Northeast and internationally. Highlights of his operatic performances include the role of Papageno in Boston Lyric Opera’s Outreach Tour of The Magic Flute, Dr. Gibbs in the New England Premiere of Ned Rorem’s Our Town, L’Arbre/Le Fauteuil in L’Enfant et les Sortilèges, Lidio in Cavalli’s L’Egisto and both Simone and the title role in Puccini’s Gianni Schicchi. Mr. Torres-Cooban has been privileged to originate several new works including the title role in Huelskamp’s The Year of the Serpent with Juventas New Music Ensemble and the bass soloist in Ordway’s the Festival Mass for the Great Vigil of Easter. Other celebrated concert performances have included the bass soloist in Handel’s Messiah and Mozart’s Requiem. José Torres-Cooban first studied music at New York University where he completed his Bachelor of Music with Gregory Sheppard . After pursuing graduate studies at the New England Conservatory of Music with the late James McDonald, he completed a B.S. in Civil and Environmental Engineering at the University of Massachusetts in Amherst. Mr. Torres-Cooban recently completed his M.S. in environmental fluid mechanics and hydrology at Stanford University. In addition to his musical pursuits, José is a coastal engineer.