“Sweet Prospect”: 17th- and 18th-century Music of the British Isles and Colonial America

During the 17th and 18th centuries, the majority of Europeans settling in a patchwork of colonies that would become the early United States were primarily English, Irish and Scottish. Taken together, their musical traditions – in the form of devotional and theatrical music, songs, dances and rousing military tunes- proved as influential as the English language in the cultural development of a young country. Please join us for a program of delightful music from this rich period of history. Danielle Reutter-Harrah (Mezzo Soprano), Gretchen Claassen (Viola da Gamba), Katherine Heater (Harpsichord) and Vicki Melin (Baroque Flute) in a program featuring the music of Purcell, Handel’s Ode to St. Cecelia’s Day, Thomas Arne’s Comus, and a collection of songs and instrumental pieces from the British Isles and the early American Colonies. 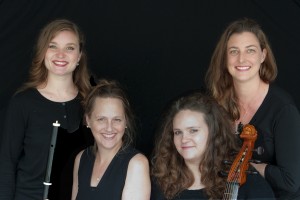 Danielle Reutter-Harrah is a versatile performer with a particular enthusiasm for historically informed performance practice. She has been lauded for her “lovely” solo (San Francisco Classical Voice) in her recent debut as a soloist with the San Francisco Symphony Chorus in Mason Bates’ Mass Transmission. She appears frequently with the American Bach Soloists, most recently singing with “beauty and passion” (San Francisco Classical Voice) in a rarely performed early version of Bach’s St Matthew Passion. 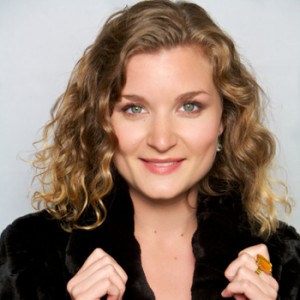 Gretchen Claassen, a versatile chamber musician, often appears as ‘cellist, baroque ‘cellist and viol player in diverse groups around the San Francisco Bay Area and beyond. She has recently performed with American Bach Soloists, Archetti, Wildcat Viols, Karl Cronin and the Americana Orchestra, and is a founding member of the Cello Street Quartet and period ensembles MUSA and the Alchemy Trio. During the 2013-14 season she will be appearing for the first time with Portland Baroque Orchestra, San Francisco Bach Choir, Nash Baroque Ensemble and Musica Pacifica, in addition to embarking on a US State Department-sponsored international tour with the Cello Street Quartet.

Gretchen’s love of chamber music began early on with three summers spent at the prestigious Kneisel Hall Chamber Music School and Festival in Maine, and string quartet studies with Joel Smirnoff of the Juilliard String Quartet. As a participant in the San Francisco Conservatory of Music’s acclaimed Chamber Music Masters series, Gretchen has collaborated with Menahem Pressler, Robert Mann, Bonnie Hampton, Roberto Diaz, and Joseph Swensen. In May of 2011, she was invited to perform alongside SFCM and Shanghai Conservatory faculty in China, as part of the Shanghai International Chamber Music Festival.

Katherine Heater, early keyboards, frequently plays with early music groups such as Magnificat and the Voices of Music. She has performed throughout the United States, including with Catacoustic Consort in Ohio, the Sun Valley Summer Symphony in Idaho and at the Berkeley Early Music Festival, the Bloomington Early Music Festival, and the Tropical Baroque Festival of Miami. She received an Arts Bachelor from the University of California, Berkeley in music and a Masters of Music in historical performance from Oberlin Conservatory. At the Sweelinck Conservatorium in Amsterdam Ms. Heater studied harpsichord with Bob van Asperen and fortepiano with Stanley Hoogland. Also an active teacher, Ms. Heater teaches harpsichord at UC Berkeley and privately.

Since 2007, Vicki Melin has made her home in San Francisco where she performs as a specialist on Baroque and Renaissance Flutes, most recently with the American Bach Soloists and as an ABS Academy Soloist with the San Francisco Bach Festival. Ms Melin attended Boston University for her Masters of Music and The Royal Conservatory of Music in Den Hague, The Netherlands, where she received her Advanced Diploma in Performance. She is the recipient of the Vivian Smith Award for Women Scholars from Boston University, Boston University’s Director’s Award and the Netherlands-America Foundation Assistance for Performers and Scholars. She has performed with early music orchestras and chamber ensembles in the United States, The Netherlands, Italy, and is frequently guest soloist with International Organ and Chamber Music Festivals throughout Poland.; most recently with the ensemble Cantica Sacra for the 2013 International Organ and Chamber Music Festivals of Raciborz and Krakow, Poland. Visit: https://www.youtube.com/watch?v=6Aaz_16JZys.

While living along the Connecticut Shoreline, she founded The Nash Baroque Ensemble named after her forebear, Thomas Nash, a Blacksmith, founding father of the town of Guilford in New Haven County and original signee of the Guilford settlement covenant of 1639.