From 1655 until his death, Johann Michael Nicolai played the violone in the Stuttgart court orchestra. In several of his numberous instrumental works, the lower instruments, such as the bass viol and the bass dulcian, are contrasted with the violins or viols independently of the basso continuo. This is the case throughout Erster Theil Instrumentalischer Sachen – 12 sonatas, all of which are for 2 violins and organ, 4 of which are for viola da gamba, and the remaining 8 are for dulcian. Passamezzo Moderno will be making a CD featuring this collection by Nicolai, which has not been previously recorded, or, perhaps, even performed since the 17th century. Works by Schmelzer, Bertali, Marini, Weckmann and Rosenmüller will also be performed.

In the early 17th century, Italian musicians began to spread the new Baroque style of music throughout Europe as they searched for employment and fame. Similarly, musicians from all over Europe, notably those employed by nobles who wished to bring their court up to date musically, came to Italy to study with Italian masters. By the mid-17th century, Germany was saturated with Italian music and Italian musicians. German and Austrian composers absorbed the new style and adapted it to their own culture well. Our program features a mix of German composers and Italian composers who worked in Germany. Music by Antonio Bertali, J. H. Schmelzer, Mathias Weckmann, Johann Michael Nicolai, Biagio Marini, and Johann Rosenmüller. 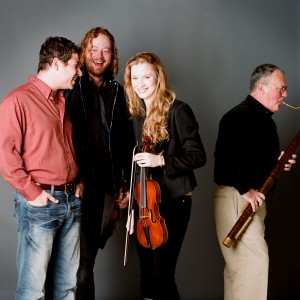 Founded in 2005, Passamezzo Moderno is a period ensemble that performs the music of three centuries, from 1530 to 1830, and specializes in the virtuoso instrumental music of the 17th century. Its members are David Granger, dulcian and bassoon, Jonathan Davis, harpsichord and organ, and Edwin Huizinga and Adriane Post, violins. Passamezzo Moderno has performed for the San Francisco Early Music Society, Berkeley Chamber Performances, the Universities of California in Berkeley and Davis, California State University, Stanislaus, and numerous chamber music series throughout northern California. Its first CD was released in 2008 to popular acclaim. Passamezzo Moderno is an affiliate of the San Francisco Early Music Society and a member of Early Music America.