Violini a due: an Italian Journey

Join QUICKSILVER for a ravishing tour of seventeenth century Italy. The 17th century was a transformative moment in our Western cultural history. The world became modern: new technologies were emerging, our modern economic system was developing, the earth was no longer at the center of the universe. Among the cultural revolutions was one in music. Composers consciously began to create a nuove musiche or stile moderno of dramatic oppositions and vivid emotions, in striking contrast to the smooth tapestry of Renaissance polyphony.

Quicksilver’s Violini a due offers an intimate exploration of this modern music as it was invented by virtuoso instrumental composers in Italy. It features their new invention, the sonata: a pure instrumental work, a piece simply meant to be “sounded,” with no agenda but the unrestricted imagination of the composer. This “new music” is virtuosic, experimental, unexpected, and deeply moving: the closest we come to wordless rhetoric. Music by Cima, Castello, Merula, Fontana, Falconieri and Marini. 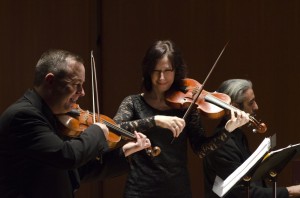 Led by violinists Robert Mealy and Julie Andrijeski, QUICKSILVER  brings together leading historically-informed performers in America today. Described as “drop dead gorgeous with a wonderful interplay of timbres,” (Early Music America) and praised for “impeccable, soulful playing,” (New York Times),  Quicksilver vibrantly explores the rich chamber music repertoire of the early modern period, from the strange and extravagant trio sonatas of the Italian and German seventeenth century to the spectacular chamber music of the High Baroque.  Featured at early music series throughout North America, Quicksilver’s performances have garnered accolades in the press from coast to coast. The ensemble’s recording, “Stile Moderno: new music from the seventeenth century” has been lauded as “technically expert, flexible in phrasing, and stylish in ornamentation, fully aware of this music’s rich sense of theatre” (Fanfare Magazine) and “Breakthrough Album of the Year” (Huffington Post). For more information, please visit www.quicksilverbaroque.com.

One of America’s leading historical string players, Robert Mealy has been praised for his “imagination, taste, subtlety, and daring” (Boston Globe). He has recorded and toured a wide variety of repertoire with many distinguished ensembles both here and in Europe. Mr. Mealy is concertmaster at Trinity Wall Street and Orchestra Director of the Boston Early Music Festival Orchestra, with whom he has led three Grammy-nominated recordings and many festival concerts, including a special appearance at Versailles. He has also led the Mark Morris Dance Group Music Ensemble in performances both here and in Moscow, and accompanied Renée Fleming on the David Letterman Show. He is Director of Juilliard’s distinguished Historical Performance Program, and a professor at Yale, where he directs the postgraduate Yale Baroque Ensemble. Prior to teaching at Yale, he founded and directed the Harvard Baroque Chamber Orchestra for a decade. In 2004, he received EMA’s Binkley Award for outstanding teaching and scholarship. He has recorded over eighty CDs on most major labels.

Lauded for her “invigorating verve and imagination” by the Washington Post, Julie Andrijeski is among the leading baroque violinists and early music pedagogues in the U.S.  In addition to co-directing Quicksilver, she maintains an active performance schedule, playing with many diverse early music groups across the nation including the Atlanta Baroque Orchestra (Artistic Director), New York State Baroque (Concertmaster), Apollo’s Fire (Principal Player), and Les Délices.  As a full-time Senior Instructor at Case Western Reserve University and Teacher of Baroque Violin at the Cleveland Institute of Music, Ms. Andrijeski leads classes in historical performance practices, teaches lessons in baroque violin, and directs the baroque music and dance ensembles.  Her combined skills in music and dance often culminate in workshops and special teaching engagements at schools such as the Oberlin Conservatory, Indiana University, Juilliard, the University of Colorado – Boulder, and at several summer workshops as well.  Her recordings can be found on Acis Productions, Dorian Recordings, Centaur, Koch, CPO, Avie, and Musica Omnia.

Avi Stein teaches at the Juilliard School, Yale University and the Longy School and is the music director at St. Matthew & St. Timothy Episcopal Church in Manhattan. He serves as artistic director of the Helicon Foundation. The New York Times described him as “a brilliant organ soloist” in his Carnegie Hall debut and he has been featured in an Early Music America magazine article on the new generation of leaders in the field. He is an active continuo player appearing regularly with the Boston Early Music Festival, the Trinity Church Wall Street Choir and Baroque Orchestra, the Clarion Music Society and Bach Vespers NYC.  Mr. Stein directed the young artists’ program at the Carmel Bach Festival and has conducted a variety of ensembles including the Opera Français de New York, OperaOmnia, the Amherst Festival opera and a critically acclaimed annual series called the 4×4 Festival.  He studied at Indiana University, the Eastman School of Music, the University of Southern California and was a Fulbright scholar in Toulouse.