He Said, She Said: Troubadours Debate the Laws of Love

Tickets available at the door. Prices: $15 general, $10 students and seniors.

In fin amor, a nobleman courts a woman who is the paragon of all virtues and graces. She is above his station and often the wife of his lord — doubly unattainable — but the effort of being worthy of her is civilizing and the suffering of unconsummated love, ennobling. Fin amor is largely for and about men, and the troubadour songs which celebrate it are largely written by men. But women also wrote songs about fin amor. And they have their own perspectives. In this concert, male and female troubadours argue the laws of love. There are debate songs, in which men and women trade verses, as well as solo pieces from one or the other perspective.

Both men and women complain that the other is not holding up the ideals of fin amor. Raimon de Miraval complains of women who are too unyielding, who play so hard to get that their would-be lovers give up. Gaucelm Faidit and Marcabru, on the other hand, complain of women who yield too much. Such a woman “takes no care of honor under her belt.”

On the women’s side, an anonymous writer fumes that what Marcabru passes off as social commentary amounts to little more than misogyny. Another common theme is power and what it does and does not grant. May a woman court a man? Castelloza insists that it is right for her to court, though she notes that society disagrees. But while she sometimes embraces the role of suffering suitor, at other times she accuses her love of excessive and deliberate cruelty. One wonders if the object of her affections welcomes her attention. The Comtessa de Proensa, on the other hand, is sure that her attraction is reciprocated, but wishes that her love would be bolder. As a woman, she says that she can’t make the first move.

May either side love openly? The powerful Comtessa de Dia states that she “will not be slow to please [herself] with joy and youth” even if it sets the gossips against her. But she cannot convince her lover Raimbaud d’Aurenga to see her. When he states, “I fear that I lose gold and you mere sand,” he is pointing out that a countess may do as she wishes, but he and others of lesser rank must guard their reputations with care.

A note on performance practice: for many of these songs, there is no surviving music. Where possible, we have used melodies from other troubadour songs with matching metrical structures. Where none exist, I have written settings. Several of the instrumental pieces were also composed for this occasion. We do not know whether troubadour songs were accompanied. If they were, the accompaniment was almost certainly improvised, as it is here. – Robin Snyder 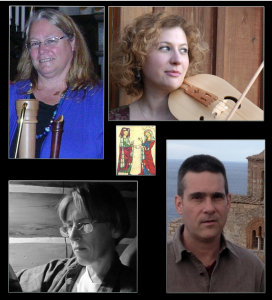 Robin Snyder is an early music vocalist by night and a physicist-turned-theoretical ecologist by day (and, let’s face it, many nights as well). She sang with Bay Area Renaissance lute song ensemble Theatrum Musicum as their first vocalist but has more recently focused on medieval music. She joined ensemble member Kathryn Canan to record a CD of thirteenth century English music, Lenten is Come, and has recorded a CD of women troubadour music, La domna ditz. Robin studied voice with contralto Victoria Hart.

Mark Grote sings medieval, renaissance and baroque music as a soloist and chorus member. During an ongoing 15-year collaboration with harpsichordist Jeanette Leifson and teacher Tamara Loring, he has studied and performed cantatas by Rossi, Sances and other 17th-century composers. He makes his living as an applied statistician with the Department of Anthropology at UC Davis.

Currently based in the San Francisco Bay area, California, Michelle Levy is Artistic Director of Redwood Guild of Early Music and is an Artist-In-Residence with Youth In Arts. She has performed internationally with an eclectic variety of ensembles and vocalists, including The Boston Camerata and vocalists Owain Phyfe, Abby Green, Maia Archote, and Moh Alileche. She’s been a featured performer at the Vancouver Early Music Festival (2013) with Sequentia & The Elaine Adair Ensemble as well as at the Connecticut Early Music Festival (2010) with Istanpitta Early Music Ensemble, and her new Contra-dance band, TriTonic, recently featured at the New England Folk Festival 2013 (NEFFA). She enjoys playing fiddle for contra and English country dance camps in the woods as well as performing with Shira Kammen’s Class V Music, an ensemble dedicated to creating music on whitewater rafting trips. www.MichelleVielle.com

Kathryn Canan enjoys playing early music on many kinds of flutes and recorders. She plays Renaissance recorder music with the New Queen’s Ha’Penny Consort and Ars Subtilior, and baroque flute and recorder with Baroque and Beyond. Her CD of thirteenth century English music with Briddes Roune is available at www.magnatune.com. She also plays modern flute and piccolo for Light Opera Theatre of Sacramento, Green Valley Theatre, and Runaway Stage Productions. Kathryn is a roving Latin tutor, recorder teacher, and freelance writer. Her CSUS liberal arts master’s thesis on Anglo-Saxon medicine makes her one of the world’s few experts on diseases caused by malevolent elves. Peruse her musings at http://eclectictutor.wordpress.com/