Italy was at the forefront of musical innovation all through the 16th century. Our program highlights various vocal and instrumental styles that characterized Italian music in that century, from the virtuoso lute works of Francesco da Milano to the decidedly English accent in the music of Alfonso Ferrabosco the Younger and the ornate vocal compositions of Luzzasco Luzzaschi. We also stop off along the way for a few of 16th century Italy’s greatest hits. 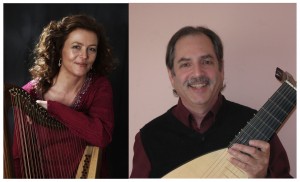 HOWARD KADIS has been an active performer in the Bay Area for over 35 years. He received his M.A. in music from Cal-State Hayward where he studied lute and guitar with the late James Bertram. He has also studied guitar with Robert Strizich and Michael Troester.

Mr. Kadis has been a frequent performer with the San Francisco Opera orchestra as both a guitarist and lutenist, having participated in performances of several Baroque Operas (Handel’s “Julius Ceaser,” and “Alcina,” Monteverdi’s “Coronation of Poppea,” and “The Return of Ulysses”) as well as productions of “Don Pasquale,” “The Barber of Seville,” (including their 2013 production), “Otello” and “Falstaff.” He has performed as a mandolinist and guitarist for the San Jose Opera Orchestra, the Joffrey Ballet, The Sacramento Ballet, and the San Francisco Ballet orchestras. Mr. Kadis has appeared numerous times with the San Francsico Symphony, having participated in their Grammy-winning recordings of Mahler’s Symphony No. 7 and Symphony No. 8 at Davies Hall and in the Symphony’s 2006 and 2007 European tours. He has also appeared with the San Francisco Symphony as a guitar soloist in the “Final Fantasy” concerts in 2009 and 2010.

In addition, he has worked with the Santa Fe Opera, the San Jose, Napa, and Santa Rosa Symphonies.  As a solo lutenist, he has performed several times as a guest of the Oregon Shakespeare Festival, at the Berkeley Early Music Fringe Festival (2008, 2010, and 2012), and as a continuo player in numerous early music concerts throughout California.

ZOE VANDERMEER, soprano, historical harps, and composer has performed extensively in Europe and North America. She has appeared at the Glasgow International Early Music Festival, the International Festival de Deia Spain, Pollock House National Trust Museum, Scotland and Nova Scotia Early Music Concerts, as well as HarpCon 2003, the Bloomington Early Music Festival, the Napa Valley Mostly Mozart Festival. Her one-woman Baroque pastiche, “If Love be the Food of Musick” was the subject of an article in Classical Singer Magazine and the Swiss journal “Harpa.” Ms. Vandermeer has been the recipient of the Dame Joan Sutherland Fund and was a finalist in both the London Young Artists Early Music Competition and the Wilfred Laurier Concert Aria Competition, Canada. She has recorded for Koch International and KachinaMusik. Her solo voice and triple harp recording, “Angel’s Wine, the Songs of John Dowland” received high praise in the UK Lute Society Journal.