Not Your Father’s Norton Anthology 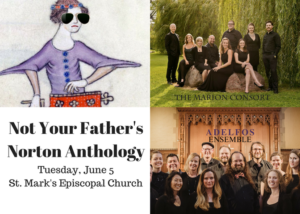 Vocal ensembles, The Marion Consort (Chicago, IL) & Adelfos Ensemblse (Santa Barbara, CA), team up for an eclectic concert of vocal music spanning the decades – of the Middle Ages and Renaissance. This concert will feature a timeline of music circa 900-1650 exploring beyond the classics of the Norton Anthology of Western Music, every music majors’ favorite textbook. Selections include music from the Codex Las Huelgas, the Cantigas de Santa Maria, Guillaume Dufay, Orlando di Lasso, Ludwig Senfl, and more! There will even be a Very Special Guest: the hurdy-gurdy!

Amy Bearden (Artistic Director–The Marion Consort) holds a masters degree in Early Music Voice from the Early Music Institute of Indiana University in Bloomington, Indiana. There, she studied voice with Paul Elliott, a renowned tenor and founding member of the Hilliard Ensemble. At Indiana, Amy focused on Medieval and Renaissance music studying both history and performance. In Chicago, Amy is the Artistic Director and Founder of The Marion Consort, a premier early music ensemble. In addition to Marion, Amy is a sought after choral artist who has performed with Texas Early Music Project in Austin, Texas and is on staff of the Amherst Early Music Festival in New London, Connecticut. Amy also holds a Bachelors degree in Music Education from Millikin University in Decatur, Illinois. Currently, Amy teaches K-8 General Music in the McKinley Park neighborhood of Chicago. 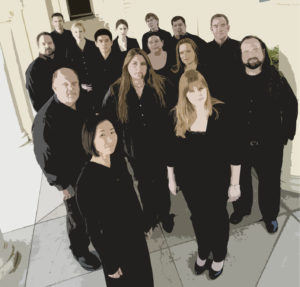 The Adelfos Ensemble was founded in 2004 as a men’s a-cappella ensemble and pursued that path until 2010, when it became a mixed voice choral ensemble. Temmo Korisheli took over direction of the group from Dr. Michael Eglin in 2008. Our goal is to offer the best of a-cappella and other choral music to audiences in the Santa Barbara area through live performances, radio broadcasts, and recordings. The group programs a broad repertoire of music spanning more than a millennium, from ancient chant and Renaissance motets to folksong arrangements and contemporary works. Adelfos Ensemble exists to explore the wide world of choral literature and, as the Santa Barbara News-Press observed, to “move right and left of center in the choral tradition.” 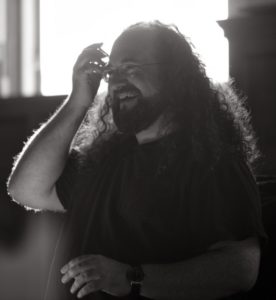 Temmo Korisheli is an active performer in many musical styles, especially medieval, Renaissance, and Baroque. Recent early-music engagements have included concerts with Ensemble Ciaramella in Los Angeles, Victoria, and New York, and with the Texas Early Music Project in Austin. He has been on staff with the Amherst Early Music Festival of New England for the past 22 years, where he has collaborated with many luminaries of the early-music world; he also serves as bursar of the Festival. Mr. Korisheli has appeared as soloist with ensembles such as the Los Angeles Baroque Orchestra, the New York Collegium under Andrew Parrott, and regional oratorio societies; as a guest artist with several university early music programs around the state and beyond; and sang for many years in the UCSB Cappella Cordina. He is a founding member of the UCSB Middle East Ensemble, sings frequently in the Opera Santa Barbara Chorus, and plays clawhammer banjo, and, this December, celebrates 20 seasons of spreading Christmas cheer with the Santa Barbara Holiday Carollers. Mr. Korisheli is assistant music director at All Saints’-by-the-Sea Episcopal Church in Montecito. He holds the MA and PhD (ABD) degrees in historical musicology from UCSB, where he studied with Alejandro Planchart and William Prizer and where he presently supervises the Music Library.