Over the Mountains: Virtuosic sonatas from 17th-century Italy and Germany 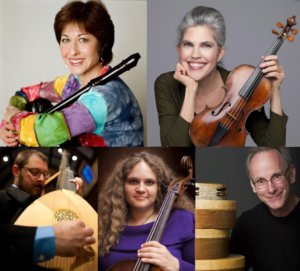 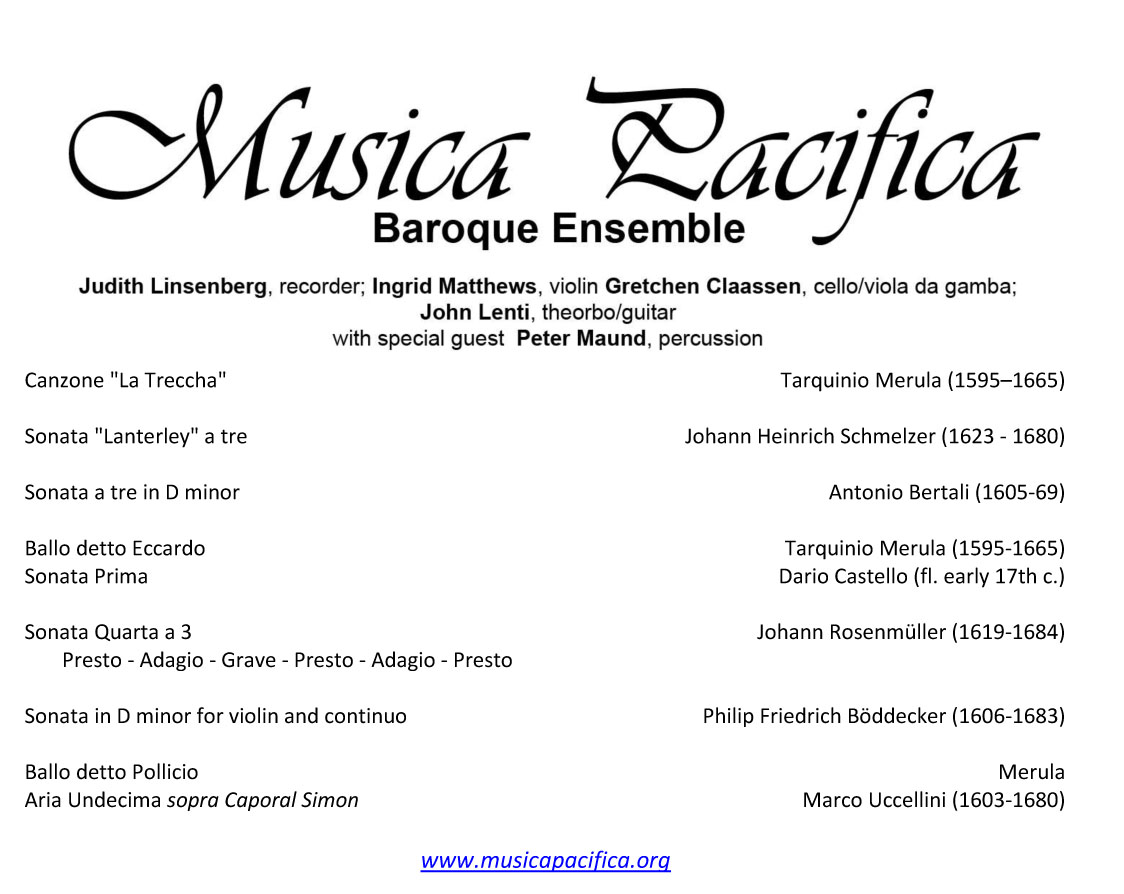 Founded in 1990, Musica Pacifica has become widely recognized as one of America’s premier baroque ensembles, lauded for both “dazzling virtuosity” and “warm expressiveness.”  They have been described as “some of the finest baroque musicians in America” (American Record Guide) and “among the best in the world” (Alte Musik Aktuell).  Individually, the artists perform with Philharmonia Baroque, Seattle Baroque Orchestra, and American Bach Soloists, as well as prominent early music ensembles worldwide. Musica Pacifica has performed on prestigious concert series throughout the U.S., such as The Frick Collection and Music Before 1800 (NY), the Getty Museum (LA), Houston Early Music, Seattle Early Music Guild, Arizona Early Music, Pittsburgh Renaissance and Baroque, Dumbarton Oaks (Washington, DC), among others. Featured at the Berkeley Early Music Festival four times, their first appearance there was cited in Early Music (UK) as “perhaps the standout of the entire festival.”  Their 2015 performance at the Boston Early Music Festival was reviewed as “sensational . . . astonishing . . . breath-taking throughout” by The Boston Musical Intelligencer. They have performed at festivals in Germany and Austria, and have been featured on German National Radio, Minnesota Public Radio, and National Public Radio’s “Performance Today” and “Harmonia.” Musica Pacifica’s nine CD releases on the Virgin Classics, Dorian, Solimar, and Navona labels have won national and international awards.

Online, Musica Pacifica can be heard on radio stations 1.fm, Last.fm, Celtic Radio, and Recorder-radio.com, as well as on Pandora, iTunes and Magnatune; and seen on youtube.com/MusicaPacificaSF. Please visit their website: www.musicapacifica.org. 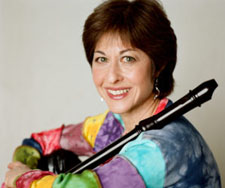 Called “the Jascha Heifetz of the recorder,” Judith Linsenberg is one of the leading exponents of the recorder in the US and has been acclaimed for her “virtuosity,” “expressivity,” and “fearless playing.” She has performed throughout the US and Europe, including solo appearances at the Hollywood Bowl and Lincoln Center; and has been featured with such leading ensembles as the San Francisco Symphony, the SF and Los Angeles Operas, the Oregon Symphony, LA Chamber Orchestra, Philharmonia Baroque, American Bach Soloists, the Portland and Seattle Baroque Orchestras, the Oregon and Carmel Bach Festivals, among others. The winner of national performance awards, she has premiered several new works for the recorder and has recorded for Virgin Classics, Dorian, Solimar, Navona, harmonia mundi usa, Koch International, Reference Recordings, Musical Heritage Society, Drag City Records (with Joanna Newsom), and Hännsler Classics.  She holds a doctorate in early music from Stanford University, and has been a visiting professor at the Vienna Conservatory and Indiana University’s Early Music Institute. In her spare time, she enjoys hanging out with her new dog, Jasper, and playing a bit of Klezmer clarinet. www.linsenberg.com 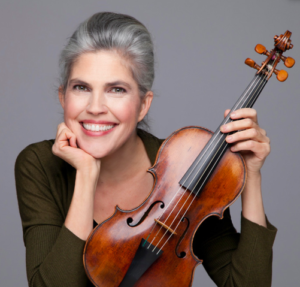 Since winning first prize in the Irwin Bodky International Competition for Early Music in 1989, Ingrid Matthews has become well established as one of today’s leading baroque violinists. She served as Music Director of the Seattle Baroque Orchestra from 1994 until 2013, earning widespread respect among musicians and audiences alike. Matthews has appeared as soloist and/or concertmaster with numerous large ensembles including the New York Collegium, the Australian Brandenburg Orchestra, Musica Angelica (LA), the Bach Sinfonia (Washington D.C), Ars Lyrica (Houston) and many others, and is active as a chamber musician with Musica Pacifica among many other groups. Her extensive discography includes a recording of the Bach Sonatas and Partitas which has been hailed as top recommendation for these works by both American Record Guide and Third Ear’s Classical Music Listening Companion. Matthews has taught at Indiana University, Oberlin College, and the University of Southern California and is currently on the faculty of Cornish College of the Arts in Seattle. She is also active as a visual artist. This is her first season as a core member of Musica Pacifica. www.ingridmatthews.com 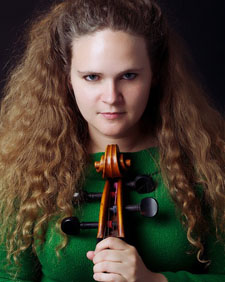 Gretchen Claassen, a versatile chamber musician, often performs with diverse groups around the San Francisco Bay Area and beyond. A member of American Bach Soloists, she has recently appeared with Seattle Baroque Orchestra, Portland Baroque Orchestra, Musica Angelica, and is a founding member of the period ensembles MUSA and Sylvestris Quartet, as well as the Cello Street Quartet. A native of Phoenix, Gretchen spent many happy years in the Phoenix Symphony Guild’s youth orchestras, going on to graduate from The Juilliard School and the San Francisco Conservatory of Music. 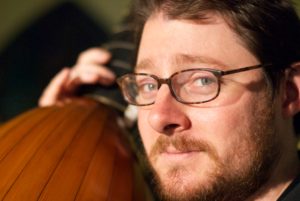 John Lenti, described by the Seattle Times as “a joy to behold,” is regularly beheld playing lute, theorbo, and baroque guitar with orchestras, choirs, and opera companies on both coasts of the United States, as well as in the interior, non-coastal part, and a few in other countries. While orchestral work as an accompanist and concerto soloist comprises most of his career, chamber music is John’s primary interest and he enjoys touring with his groups Wayward Sisters, the I-90 Collective, and Ostraka, while appearing as a guest with many other notable ensembles. His recording credits include several well-received albums with some of the aforementioned bands, and his liner notes, program notes, and lectures have drawn praise. His most intense musical love is the English golden-age lute song repertoire, and his sincere desire is to become the Gerald Moore of the lute (currently accepting applications for a quiet Fischer-Dieskau with no vibrato), once that becomes remunerative. A native of South Carolina, John attended the North Carolina School of the Arts and Indiana University, and he studied lute with Jacob Heringman, Elizabeth Kenny, and Nigel North, also receiving valuable guidance from Pat O’Brien, Walter Gray, and Ricardo Cobo. 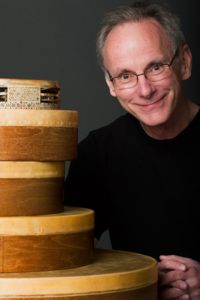 A native of San Francisco, Peter Maund studied percussion at the San Francisco Conservatory of Music and music, folklore, and ethnomusicology at the University of California, Berkeley. A founding member of Ensemble Alcatraz and Alasdair Fraser’s Skyedance, he has performed with early and contemporary music ensembles including American Bach Soloists, Anonymous 4, Chanticleer, Hesperion XX, Kitka, Musica Pacifica, Philharmonia Baroque Orchestra, and Voices of Music, among others. He is the author of “Percussion” in A Performers Guide to Medieval Music, Indiana University Press, 2000.  He has served on the faculty of the University of California, Berkeley as well as in workshops throughout the US and Europe. Described by the Glasgow Herald as “the most considerate and imaginative of percussionists” he can be heard on over 60 recordings.