By Heidi Waterman on May 31, 2022 in BFX Main-Stage, Uncategorized 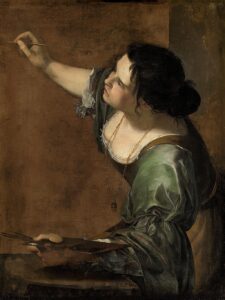 Self-Portrait as the Allegory of Painting (La Pittura), Artemisia Gentileschi; the Royal Collection

The life of painter Artemisia Gentileschi was so dramatic it could only be described as “operatic”: trained by her father, fellow painter Orazio Gentileschi, Artemisia became a renowned painter in her own right despite the gendered expectations of her time and the traumas she suffered; first losing her mother at the age of twelve, and, five years later, when she was raped by one of her father’s colleagues, Agostino Tassi. When Tassi refused to marry her (to restore her dignity and secure her future, as often happened in these cases), her father pursued a legal case against him. The trial took several months; Artemisia was forced to give evidence under torture while Tassi, though convicted, never served his sentence.

A month after the trial, Orazio arranged for his daughter to marry Pierantonio Stiattesi, a modest artist from Florence. In Florence, Artemisia and Pierantonio had five children, only one of which, Prudentia (named after Artemisia’s mother), survived into adulthood—and who became a painter in her own right. At some point along the way, Stiattesi disappeared from the picture (no pun intended), although Artemisia, thanks to her skills and friendships with prominent artists and thinkers of her time, including Galileo, did not appear to suffer a significant loss of status or income: she became the first woman to become a member of the Accademia di Arte del Disegno in Florence and began to build an international clientele, including Cosimo de’ Medici (the grand duke of Tuscany) and King Philip IV of Spain. 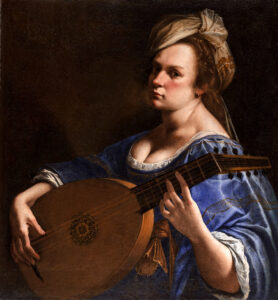 Self Portrait as a Lute Player; Wadsworth Athenium Museum of Art

Perhaps as a way of processing the trauma of the rape (although this is a hotly debated topic among art historians and feminists), Gentileschi returned several times to the stories of heroines exacting revenge on men from myths, allegories, and the Bible—most tellingly, that of Judith and Holofernes, which she depicted on at least three different occasions—as a subject of her paintings. Her paintings show her skill in using color, as well as the chiaroscuro technique of using light and shadow to create dramatic emphasis, similar to her father’s friend, Caravaggio. Eventually her fame surpassed that of her father’s, and she was able to support herself and her daughter on her earnings as a painter, quite remarkable at a time when women were rarely allowed to make their own way in the world.

If you’re wondering whether there’s an opera about Gentileschi, you’re in luck—there is! Come see ARTEK‘s show featuring soprano Sarah Chalfy in Artemisia: Light and Shadow at the BFX on Saturday, June 11, at 8 PM!

The Burgundian School and the Order of the Golden Fleece