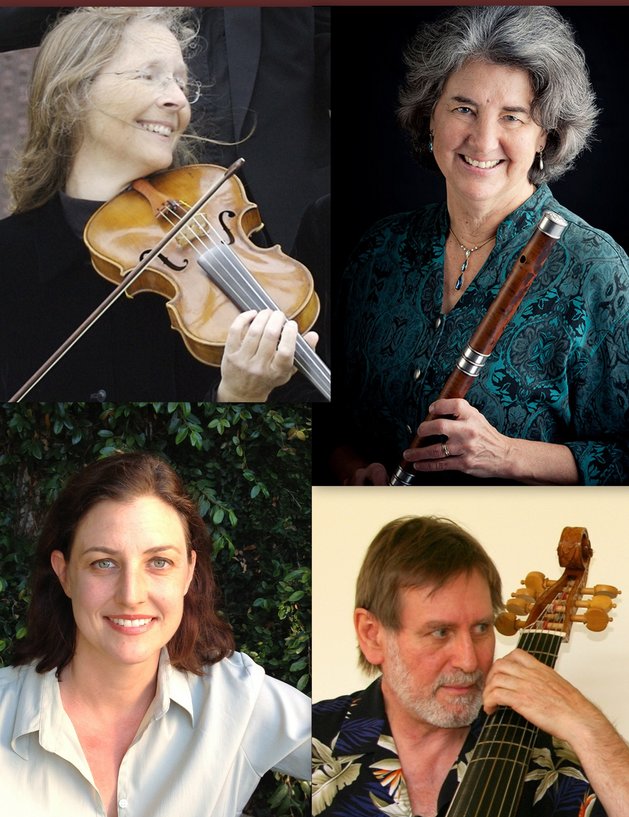 This is simply a program of the best of the late baroque chamber music by Bach, Rameau and Telemann.   Rameau’s “Pièces de Clavecin en Concerts” bring operatic style and Rameau’s extraordinary harmonic language to the French chamber idiom, and this program centers around the 3rd of these pieces, 2 contrasting movements and then a spectacular Tambourin to end.   Bach is represented by the lovely triosonata BWV 525, and the program is bookended by Telemann’s iconic Paris Quartet in E minor, so that the famous chaconne ends the program.

The players need no introduction to Bay Area audiences: the group was formed specifically to play this repertoire, and their previous concerts in the area have played to packed audiences. 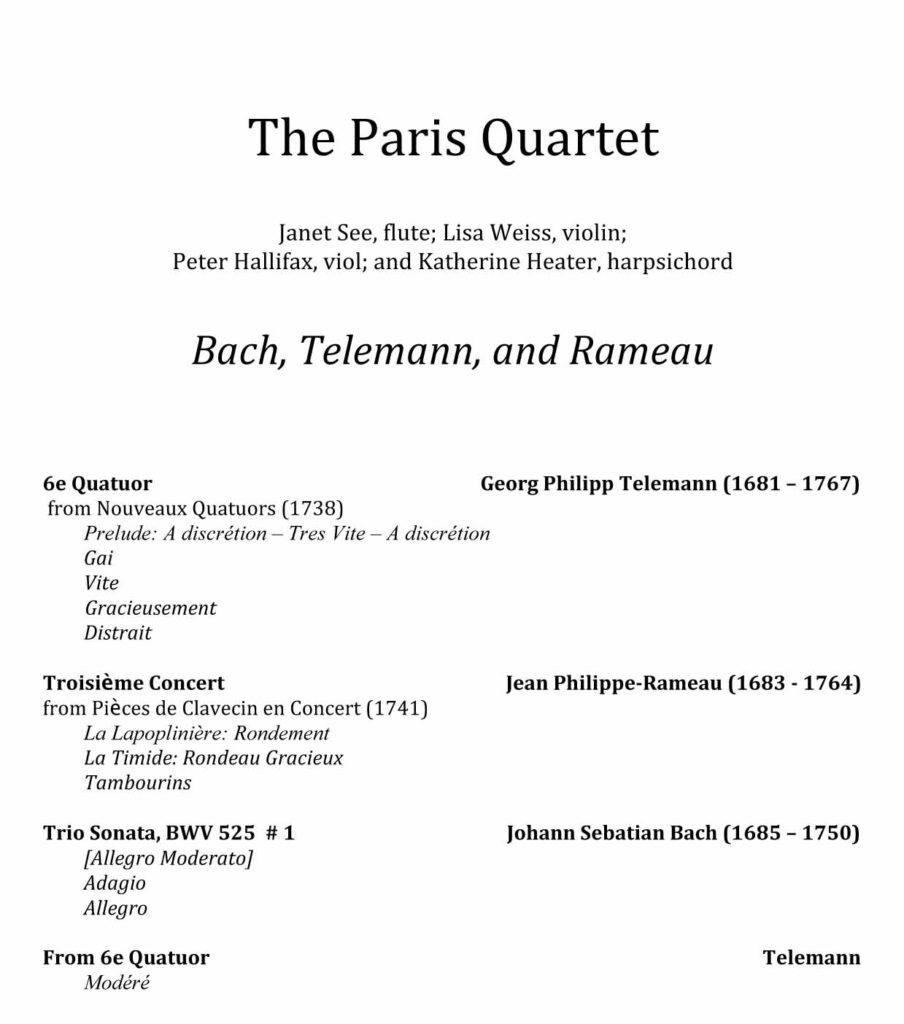 JANET SEE is one of today’s outstanding performers on baroque and classical flute. For over 30 years she has performed as a soloist, in chamber music, and in orchestras throughout North America and Europe.

In London, where Janet lived for 12 years, she played principal flute for Sir John Eliot Gardiner’s two orchestras, and with those groups recorded the complete Mozart Operas and Beethoven Symphonies as well as numerous other discs. While in London she also played principal flute for ‘The Taverner Players’, conducted by Andrew Parrott. In North America Janet plays principal flute with Philharmonia Baroque under Nicholas McGegan and has recorded Vivaldi and Mozart Concertos with that orchestra. She also performs frequently with the Portland Baroque Orchestra and as guest soloist with chamber music ensembles throughout the US and Canada.

Among her highly acclaimed recordings are the Vivaldi Concertos and the complete Bach Flute Sonatas, both recorded on the Harmonia Mundi label. Other labels she has recorded on include DG Archive, EMI, Erato, Hyperion and Phantom Partner.

Janet is on the Early Music Faculty at Cornish College of the Arts in Seattle and is an active and enthusiastic teacher of early flutes and also of interpreting the nuance and language of baroque and classical music on modern flute. She received her degree on the modern flute at Oberlin Conservatory, training with Robert Willoughby. Her post-graduate training was with Frans Vester in The Hague. Janet is a qualified teacher of the F.M. Alexander Technique, having trained in London with Walter Carrington. She currently lives on Bainbridge Island, Washington with her husband and son.

LISA WEISS lives with her husband and three teenagers on a few acres of an old almond orchard in Solano County. She works with several turtle and tortoise conservation organizations focusing on captive breeding for critically endangered species, public education, and rehab. She is an enthusiastic ultramarathon runner and also loves hiking, geocaching, Bartok, knitting, and puzzles. Musical activities over the last few years have included performing locally with ABS and Philharmonia Baroque as a concertmaster and soloist, concerts in Germany and Scotland as lead violin with the Bach Ensemble, a season as guest principal violin with Earplay, touring in England, Amsterdam, Germany and the U.S. with PBO, and she is a principal player with the Festival Orchestra Göttingen at the International Handel Festival.  With the New Esterhazy Quartet, she is currently preparing to perform the complete string quartets of Haydn during the 2007-08 and 2008-09 concert seasons.

Since 1996, harpsichordist, fortepianist, and organist Katherine Heater has made her home in the San Francisco Bay Area where she is a frequent performer with early music groups such as Magnificat, Mazzetto and Voices of Music. Ms. Heater received her B.A. in music from UC Berkeley and her M.M. in historical performance from Oberlin Conservatory. Thanks to fellowships from her alma mater and Philanthropic Ventures Foundation, Ms. Heater studied early keyboards at the Sweelinck Conservatorium in Amsterdam. She has taught at the San Francisco Conservatory of Music, San Jose State University, UC Santa Cruz, San Francisco School of the Arts and The Crowden School, as well as at three of the San Francisco Early Music Society’s summer workshops.