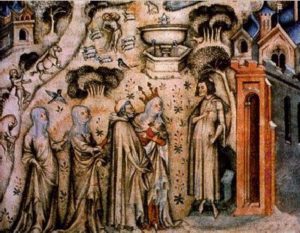 Vajra Voices, known for their “shimmering resonance and elegantly paced performances” present a program of music of Machaut. Shira Kammen (vielle & harp) joins in this concert of motets, instrumentals, and Machaut’s exquisite Le Lai de la Fonteinne~ The Lay of the Fountain. The artful poems and compositions of the French cleric, poet, and composer, Guillaume de Machaut (1300-1377) exemplify the conflict between human pursuits and divine aspirations. Chivalric love offers a practice of humility, and devotion and adoration for the unattainable. For sexual desire and romantic infatuation are steps in the courtly dance of seeking union with the Divine. In Machaut’s motet, Tous corps/De souspirant cuer/ Suspiro, the top two voices sung simultaneously have completely different texts. Both poems lament and extol the joy of painful longing in unrequited love. The music for each poem is composed over a previously existing tenor line (usually from a liturgical chant) in this case, Suspiro, or Sigh.  In Machaut’s Lay of the Fountain the image of a fountain serves as a beautiful metaphor for the Christian Trinity. In verse one, the narrator declares that since he is ignored by the courtly lady he pursues, he chooses, instead, to turn to the Virgin Mary. His logical argument is on how the Virgin is the source of the fountain from which the Word becomes flesh- the Christ; which gives rise to the Holy Spirit; and, all are created by God. From verse 4:  “These three with little difficulty I can prove to be one: Think of a fountain, The stream flowing from it, and its source.” Verses 5 – 8 expound upon the significance of the source (Virgin Mary) and the fountain (the Trinity); and, not without a bit of humor. (See verse 7.) In verses 9 to the end, the poem becomes supplication to the Virgin that we be delivered from Satan’s grasp. Instrumental arrangements by Shira Kammen, and, Machaut’s adroit rondeau, Ma fin est mon commencement round out this program of selected works by Guillaume de Machaut: The Last Trouvére. 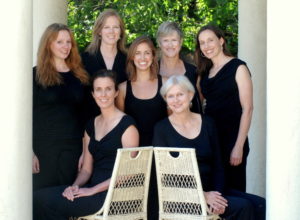 AMY STUART HUNN holds advanced degrees in choral conducting from Stanford University and USC. She is Emeritus Artistic Director of the Los Altos-based Collage Vocal Ensemble, and served as director of the Stanford Summer Chorus for eight seasons. She recently relocated to Portland, Oregon with her family, where she sings with the Trinity Episcopal Cathedral Choir, and will this spring appear with the women’s vocal ensemble In Mulieribus.

Soprano PHOEBE JEVTOVIC ROSQUIST’s  singing spans repertoire from the medieval to the contemporary, with a specialty in the baroque era. She has appeared as a soloist with the Waverly Consort, Voices of Music, American Bach Soloists, Musica Angelica, Bach Collegium San Diego, and North Holland Opera. Among her varied collaborations are the baroque ensemble La Monica; medieval ensemble Cançonièr; art song with celebrated pianist Robert Thies; and early music and dance with Italy’s visionary Art Monastery Project and Bologna-based Cappella Artemisia. Phoebe completed her Master of Arts degree in Early Music Performance at the University of Southern California, and has edited a book of 17th century solo songs by Tarquinio Merula published by A-R Editions. Also a choral conductor, she has directed a Gregorian chant choir in Newport Beach, directed the Art Monastery Coro in the U.S. and Italy, and co-directs the Women’s Antique Vocal Ensemble (WAVE) in Berkeley.

ALLISON ZELLES LLOYD soprano has recorded and performed in the U.S. and Europe with with Steve Reich, Paul Hillier’s Theatre of Voices, American Bach Soloists, Bimbetta, Altramar, Vajra Voices, Ensemble Alcatraz, Calextone and harp ensemble Angelorum. Allison can also be heard on several Indiana University Focus label recordings including the Hildegard The Lauds of St. Ursula, and the recent 2013 Naxos release of Bortniansky Hymns and Choral Concertos. Allison holds a Masters of Music degree from the IU Early Music Institute. Allison teaches Music Together and Orff Schulwerkmusic programs in the SF Bay Area and is a lecturer on Early Childhood Music Education (Montessori) at St. Mary’s College.

Multi-instrumentalist SHIRA KAMMEN  has spent much of her life exploring the worlds of early and traditional music of all kinds. A member for many years of the early music Ensembles Alcatraz and Project Ars Nova, she has also worked with Sequentia, Hesperion XX, the Boston Camerata, storyteller/harpist Patrick Ball, singers Azam Ali and Joanna Newsom, the Balkan group Kitka, Anonymous IV, the King’s Noyse, the Newberry and Folger Consorts, The Compass of the Rose, Vajra Voices, Calextone, the Oregon, California and San Francisco Shakespeare Festivals, and is the founder of Class V Music, an ensemble dedicated to providing music on river rafting trips. She has worked with students in many different settings, among them teaching summer music workshops in the woods, coaching students of early music in such schools as Yale University, Case Western, the University of Oregon at Eugene, and working at specialized seminars at the Fondazione Cini in Venice, Italy and the Scuola Cantorum Basiliensis in Switzerland. Shira has played on several television and movie soundtracks, including ‘O’, a modern high school-setting of Othello and ‘’The Nativity Story’, and has accompanied many diverse artists in recording projects, among them singers Azam Ali and Joanna Newsom. Some of her original music can be heard in an independent film about fans of the work of JRR Tolkien. The strangest place Shira has played is in the elephant pit of the Jerusalem Zoo. She has recently taken courses in Taiko drumming and voiceover acting.