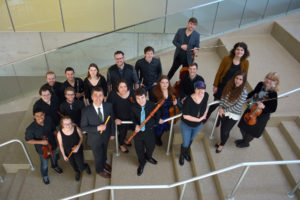 Fringe Music: Music from the Peripheries of 17th- and 18th-century Europe

In this program we venture on a musical journey of discovery that features rarely heard music from the fringes of seventeenth- and eighteenth-century Europe. Starting in Portugal, you will hear a virtuosic and energetic harpsichord concerto by Carlos de Seixas (1704–1742) as well as the spirited rhythms and call-and-response patterns of an anonymous seventeenth-century Villancico de Negros, representing Black Africans who joyfully celebrate the birth of Christ. We will then move north to Denmark where King Christian IV, the most culturally active Danish king of all time, made his court a major center for the arts by employing musicians from all over Europe. We will perform a madrigal by Danish composer Mogens Pedersøn (ca. 1583–1623), and instrumental ensemble music by Matthias Mercker (fl. 1585–1622), a composer of Dutch origin. For the third and final part of our concert we will travel to Eastern Europe, to the court of the culturally sophisticated Prince-Bishop Karl von Liechtenstein-Kastelkorn, situated in the Moravian town of Kroměříž, to perform instrumental sonatas and partitas of two composers associated with this court, Johann Heinrich Schmelzer (c. 1620–1680) and Heinrich Ignaz Franz Biber (1644–1704).

For more than 40 years, the BGSU Early Music Ensemble has been a vital part of the diverse performance culture in the College of Musical Arts at Bowling Green State University. The ensemble usually consists of 15–20 students, with a group of six string players, a recorder consort, six singers and a harpsichord player. We perform once or twice per semester in venues in- and outside the BGSU campus. The ensemble has worked with internationally acclaimed early music specialists such as Bob Wiemken, David Douglass and the Ensemble REBEL. Its director, Arne Spohr, holds a PhD in music history from the Hochschule für Musik und Tanz in Köln (Germany), where he also studied recorder with Wolfgang Dey.

The group performs repertory from the early sixteenth to the late eighteenth century. Concert programming has centered on topics that tell “music histories,” not necessarily found in textbooks or music history lectures. These include programs such as The Travels of John Dowland. A Musical Journey through Europe c. 1600 (2011), Improvisation and Variation in Renaissance and Baroque Music (2011) and Images of Orpheus (2012).