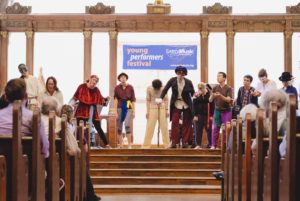 The USC-Thornton Baroque Sinfonia is  an ensemble of period instruments and voices specializing in music from the late 16th through the mid-18th centuries. Classified as one of the official “large ensembles” of the Thornton Music School, the Baroque Sinfonia consists of approximately ten graduate students majoring in early music, joined by graduate students of modern instruments and voice minoring in early music, and a small but growing number of undergraduate students, all performing four different programs each year. Most of the members also perform in the USC Collegium Workshop, presenting two concerts per year devoted to Medieval and Renaissance music.

The ensemble has performed in numerous festivals in California and in the Berkeley and Boston Early Music Festivals as winners of the Early Music America Collegium Grant and YPF Competitions. Its performances have been  heard over National Public Radio, and its members, past and present, perform, research, and teach around the world. Their recording of British broadside ballads D’ye Hear the News, commissioned by the Yale University Press, can be heard online at iTunes U. The ensemble was founded in 1986 by James Tyler, and is currently led by early music program director Adam Knight Gilbert.